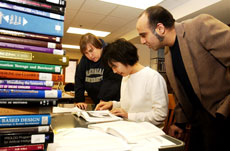 Most students walk by the large brown brick building at 501 E. Daniel St. in Champaign on their way to class every day but have no idea what’s inside. The little-known building is home to the nation’s top-ranked library science program, the Graduate School of Library and Information Science (GSLIS).

Ranked first by U.S. News & World Report, the GSLIS offers a variety of programs to both its students and the community. A doctoral degree, two graduate degrees and an undergraduate minor are offered within the GSLIS, and the school itself is home to two academic journals and three research and outreach centers.

John Unsworth, dean of the GSLIS, said one of the distinguishing factors of the school is the way its programs are structured.

“We have historically resisted fragmenting the master’s program into different tracks,” Unsworth said. “It’s important to keep everybody in the same track, to hold library science and information science together.”

Another distinguishing factor of the GSLIS is the Library Education Experimental Program (LEEP), the first online degree program offered by the University, and second in the nation in library and information science. LEEP allows students to obtain the Master of Science in Library and Information Science from virtually anywhere in the world. LEEP accounts for half of the students enrolled in the master’s program, and Unsworth said the GSLIS is well-known for it.

“It is the most developed, effective online education program in this discipline,” Unsworth said. “We are generally recognized as a leader in that area.”

The GSLIS is one of the largest library and information science programs in the country, and enrollment and interest in the program have grown significantly in recent years. The number of graduate applications increased from 423 for the 1998-1999 school year to 890 for the 2002-2003 school year. Enrollment increased from 115 graduate students in 1998-1999 to 275 in 2002-2003. Unsworth said this could be a result of the program’s ranking itself, but he thinks the Internet has probably also had an impact. Unsworth said as more information is being created and stored digitally, it becomes increasingly more difficult and important to preserve it.

“The World Wide Web broadens the territory and things you could do with this training,” Unsworth said.

The most popular concentration within the master’s program is children and youth services, an area of study for those interested in literature or working in academic or public libraries. One-third of the master’s students are enrolled in this concentration.

Approximately 140 undergraduate students are enrolled in the GSLIS Information Technology Studies minor this year. The program is offered cooperatively with the Institute for Communications Research and is open to students from all colleges and majors.

The GSLIS doctoral program is the oldest library and information science doctoral program in the nation. Unsworth said the program trains people who would like to work as faculty and researchers at colleges or universities.

Programs within the GSLIS are flexible, allowing students to pursue interests beyond their core courses.

“We tailor the program to individual interests,” Unsworth said. “We’re most interested in working with people and providing service.”

Areas of interest taught within the GSLIS programs include issues in information management, information retrieval, the impact of economic policy on the flow of information, preservation of and access to information, collection development and issues of information policy – including copyright, censorship and the Patriot Act.

“Information is being put off limits because it’s potentially proprietary, that used to be part of the public record but is no longer available,” Unsworth said. “We don’t want government making that choice for people.”

First-year doctoral student Ingbert Floyd graduated with a degree in cognitive science. He said he initially chose to pursue a Ph.D. in library and information science because the field offers more job opportunities.

“I thought, there’s libraries everywhere, and there can’t be that many people getting this degree,” Floyd said. “But I realized quickly that the study of information was something strongly associated with my research interests, and it inspired me to get a degree.”

Floyd’s research interests include institutional structures and infrastructure, which he said do not fit into other academic departments. He said the GSLIS was the best fit for him because of the flexibility of its programs.

“The department is extremely flexible,” Floyd said. “It allows you to pursue research you’re interested in and pursue it rigorously.”

Betsy Hearne, GSLIS professor, said this is a strength of the program.

“We always cross boundaries between disciplines and levels of professional and academic activities,” Hearne said.

In addition to innovative programs of study, the GSLIS provides outreach services to the community. Prairienet, a community information network for Champaign-Urbana, promotes equal access to computer resources for everyone. Prairienet specifically helps community organizations provide and retrieve online information.

The Center for Children’s Books, located on the lower level of the GSLIS Building, houses a non-circulating reference collection of 14,000 first-edition children’s books.

Hearne, who is also the director of the Center for Children’s Books, teaches courses in children’s literature, storytelling and folklore. Hearne said the “aesthetic dimension” of information needs to be taken into account as more people are looking to the Internet to get their information.

“We need to think about what’s being lost and gained,” Hearne said. “We need to look at technology as it affects not just science but also social science and the humanities.”