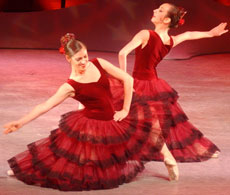 Holiday spirit was evident on campus Sunday during the sold-out performance of The Nutcracker at the Krannert Center for the Performing Arts. Two of the Champaign-Urbana Ballet and Sinfonia da Camera’s five performances over the weekend were sold out as well.

The production of the classical two-act ballet, which is based on E.T.A. Hoffmann’s tale The Nutcracker and the Mouse King and features music by Piotr Ilyich Tchaikovsky, starred area dancers of all ages.

Autumn Anders, an 8-year-old Urbana resident, played the role of a mouse in the Saturday evening performance of The Nutcracker. Anders said her favorite part of dancing in the ballet was memorizing her role. Anders’ brother Mason played the role of Fritz in Sunday’s show.

Urbana resident Courtney Cook brought her mother Barbara Poss and son Samuel Rallis to the show for Samuel’s fourth birthday. Rallis said he was excited to see The Nutcracker and was looking forward to “when the curtains open.”

During the 20-minute intermission, attendees had the opportunity to visit the Ballerina Boutique to purchase small gifts and enjoyed colorful “ballerina cupcakes.”

Champaign resident Barbara Lyding brought her six-year-old daughter to the performance. Lyding has attended the show for the past three years with two other families. But as a longtime area resident, Lyding said the event has a special significance to her.

“Growing up, I came to the Lincoln Center for the Performing Arts as a child every year to see The Nutcracker,” Lyding said. “It’s a

tradition I wanted to start for my child.”