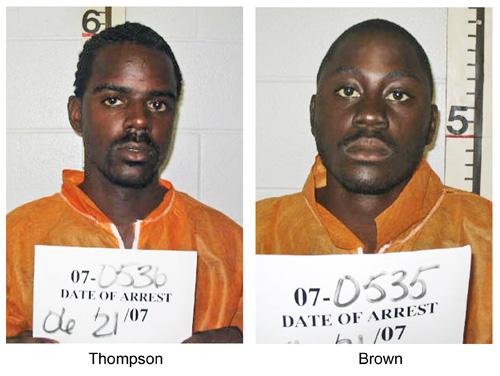 Seen in June 21 booking photos provided by the Illinois State Police are William B. Thompson, 26, left, and Yusef Kareem Brown, 23, both from Chicago. Thompson and Brown, charged with a combined 48 counts, pleaded not guilty on Friday. The Associated Press

Between them, William B. Thompson and Yusef Kareem Brown face 48 criminal counts.

Both are charged with the attempted murder of Douglas County Chief Deputy Tommy Martin the morning of June 21. Thompson also faces charges of taking hostages at an Arcola bank later that day. All the hostages were safely released.

Attorneys for the men entered the pleas. Neither 26-year-old Thompson nor 23-year-old Brown, who both wore black-and-white striped jail-issued shirts and pants, spoke during the hearing. Both were shackled at the hands and feet.

State Police investigator Matt McCormick testified during a portion of the hearing intended to show cause that the two should stand trial. He said the men admitted during interviews that they broke into a home in rural northern Douglas County on June 21. McCormick said Thompson also admitted to later shooting at a State Police car during a high-speed chase across the county, about 150 miles south of Chicago.

State’s Attorney Kevin Nolan asked McCormick whether Martin, just before he was shot in the face and torso, radioed from his car that he was responding to a call from the home. McCormick said he had.

“Was his next dispatch that he had been shot?” Nolan asked.

“Yes it was,” McCormick testified.

McCormick also said that ballistics tests on the 9 mm handgun found in the bank after Thompson surrendered showed that it matched shell casings found at the scene of Martin’s shooting.

Neither of the public defenders representing the defendants – Jeannine Garrett for Brown and James Lee for Thompson – called witnesses. Messages for comment left at their offices later Friday were not immediately returned.

Martin, 59, has been at Carle Foundation Hospital in Urbana since he was shot. He remained in critical condition Friday, hospital spokeswoman Gretchen Robbins said.

His son, Daniel Martin, wrote on a Web site Thursday that Tommy Martin was “somewhat awake” but was possibly having unspecified surgery Friday.

Judge Michael Carroll said in court that he was friends with Tuscola native Martin, but believed he could preside fairly over the trials.

“The court has known the victim, Tommy Martin, all his life and considers him a personal friend,” Carroll said, adding that Carroll’s wife and Martin were high school classmates.

Chicago police also are investigating the death of the man who owned the Infiniti driven during Thompson’s and Brown’s initial traffic stop.

Arnie Graves, 40, was found stabbed to death the same day in his Chicago condominium. Satanic messages and paraphernalia were found at the scene, police said. Chicago police detectives have interviewed Brown and Thompson but aren’t calling them suspects, police spokesman Pat Camden said.