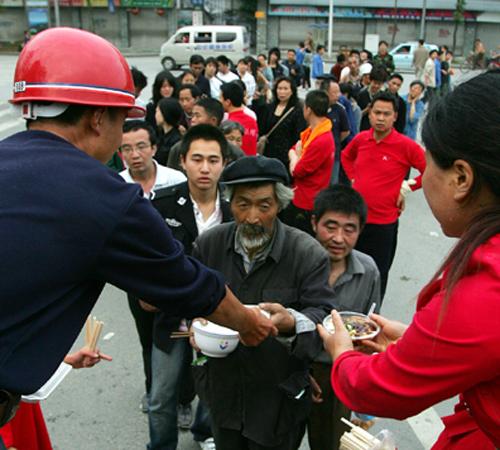 Residents line up for food handouts in a street in Dujiangyan, in Sichuan province Wednesday May 14, 2008. The official death toll from the earthquake reached almost 15,000 Wednesday, with many thousands more missing. Greg Baker, The Associated Press

University students and community members plan to locally remember the victims and aid the survivors of the severe earthquake that hit central China Monday.

The Chinese Students and Scholars Association and the Overseas China Education Foundation have planned a candle requiem and a blessing of the victims for Thursday night from 8 to 8:30 p.m. at the north end of the main Quad.

The groups have also organized two fund-raisers for Thursday and Friday from noon until 2 p.m. at a table inside the south entrance of the Illini Union. Donations will also be accepted Saturday at the Lincoln Square Farmer’s Market from 8 a.m. until noon.

The donations will be given to the Chinese Red Cross by the American Red Cross’ Central Illinois chapter.

About 10,000 people were estimated to have been killed Tuesday by the 7.9-magnitude quake. Rescue workers cannot be sure how many more are trapped beneath rubble.