UIPD prepares for Unofficial, hopes to see it end someday 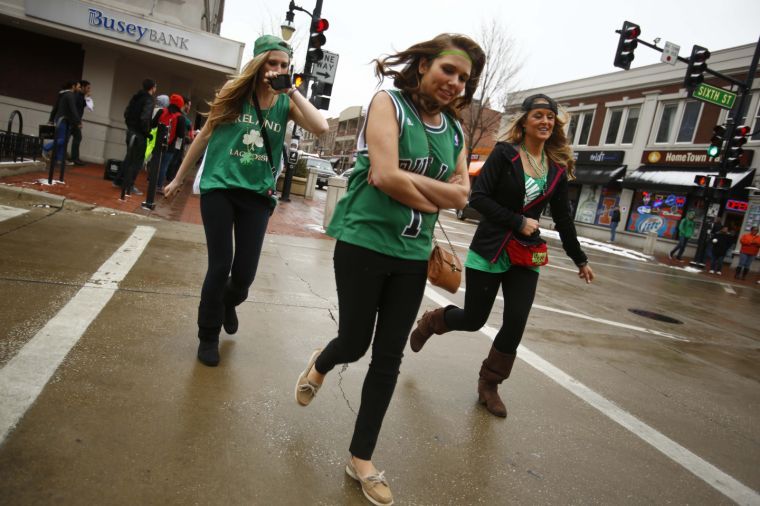 An Unofficial reveler tries to keep warm while walking down Green St. on Unofficial on Friday, March 1, 2013.

As police begin preparations for Unofficial St. Patrick’s Day on March 7, they can only hope the high-risk student-run holiday will someday come to an end, UIPD Captain Roy Acree said.

“It’s on our wish list, but I’m not saying it’s going to end any time soon,” Acree said. “I’m not sure how much control we have.”

UIPD has been able to move Unofficial activities out of academic areas, such as University Housing and Private Certified Housing, but the issue isn’t the event itself — it’s the detrimental effects that come with it, UIPD Deputy Chief of Police Skip Frost said.

Unofficial was originally heavily promoted by local bars, who benefitted the most from the event. Police and city government worked together to add restrictions, such as raising the bar entry age to 21 for the day, Frost said.

“We moved it to a more decentralized thing where it’s still on campus, but it’s at private parties more so than it is the bars, and now it lives in cyberspace,” Frost said. “It’s one of those things where the students are really keeping this thing going.”

Acree prepares for Unofficial for weeks in advance, creating a plan to cover all aspects of the event so the police can “be omnipresent,” Frost said.

“People know if you’re going to do things that are unlawful, you’re probably going to catch one of our eyes,” Frost said. “With us, Champaign, Urbana, the state police, we’re all in the campus district on that day.”

Unofficial is known as an annual high-risk event that includes student injury, police officials said. UIPD Chief of Police Jeff Christensen said the department is haunted every year that there will be another student fatality, and they do as much as they can to mitigate that potential.

“A lot of that falls on (an) individual’s responsibilities,” he said. “The event that appears fun to a lot of participants can turn really ugly just with some bad choices.”

Injuries that UIPD has seen in the past include falling off balconies, falling on the ground and battery due to alcohol consumption, Frost said. Multiple students are sent to the hospital each year for drinking-related health problems.

“The message we always put out is, ‘Don’t invite that guy or that girl,’” Frost said, referring to people known for making bad decisions.

Frost said 70 percent of enforcement action taken is against people who are not associated with the University.

UIPD is holding a meeting on Monday with local law agencies to announce strategies for Unofficial.

“What we’re looking for is to keep our community safe, and to do that, it takes a lot of police preparation and hours worked,” Frost said.