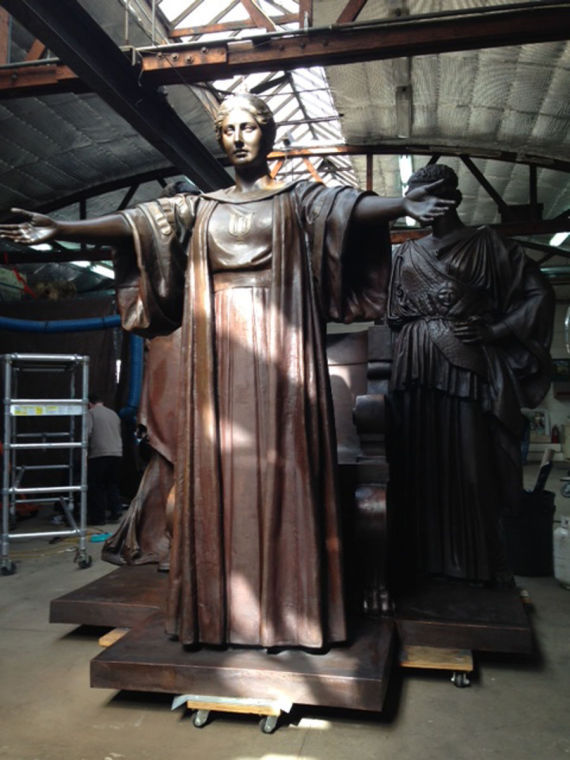 When the Alma Mater returns to campus, she will have returned to her original color, or as close as conservators can match it. The sculpture will now be a chocolate bronze, instead of the familiar green with white and black streaks.

The beloved green color was actually an indication of harmful oxidation occurring on the statue, said Jennifer Hain Teper, chair of the preservation working group. A little oxidation is fine, but after a while it starts to damage the surface, which is the point the Alma Mater had reached because it had never been cleaned, she said.

The white and black streaks on the statue were indicators of advanced corrosion and that the surface of the sculpture might be harmed. The initial reason the conservators brought attention to the need for conservation, she said.

No record can be found of the exact color Lorado Taft, sculptor of the Alma Mater, intended the statue to be. Melvyn Skvarla, campus historical preservations officer, said there was a large fire in Taft’s studio and many of his documents were lost after the creation of Alma Mater. There are pictures from 1929 of when the statue was brought to campus. Color pictures of bronze were turned black and white in an attempt to compare difference bronzes to the original picture.

Although the original plan was to clean the statue to remove the harmful corrosion on the outside of the sculpture, it was clear that something had to be done about the inside bolts as well when Alma Mater was lifted up in 2012.

“There was no question. We had to repair the inside as well,” Hain Teper said.

The different sections of the sculpture are connected by bolts, all of which had to be replaced. Christa Deacy-Quinn, collections manager at the Spurlock Museum, said the conservator did an x-ray of the statue and found that every bolt in the statue was failing or had failed.  Some bolts were missing completely, either turned to dust or broken off by the force of their weight.

Hain Teper, said the fact that people climb on the statue has been a major factor in the conservation efforts. She added that it would have been a much simpler process if only the cosmetic issues were addressed. But, because the bolts were rusting, the statue may have broken from people climbing on it and could have been dangerous for the climbers, she said.

Every bolt was replaced with a bronze bolt, which was the most expensive and time consuming part of the conservation efforts, Hain Teper said. Melvyn Skvarla, campus historical preservations officer, said the sculpture was taken apart so the bolts could be changed in all the little areas of the sculpture. For some of the replacements, a conservator had to go inside the sculpture in order to reach the small spaces, he said.

Iron bolts are cheaper than bronze, so that may be why they were originally used. However, the combination of iron-on-bronze does not mix well and led to corrosion which jeopardized the quality of the sculpture, Deacy-Quinn said.  But, the bronze-on-bronze combinations should last a few hundred years.

Taft graduated from the University with his bachelor’s in 1879 and his master’s in 1880. He grew up around campus because his father was a professor of geology. Taft was fond of the University, expressing his admiration and his hope of building an Alma Mater statue for campus in letters to the University architect at the time, Skvarla said.

Taft’s dream was for the sculpture to “show ‘Our Mother’ as a benign and majestic woman in scholastic robes, who rises from her throne and advances with outstretched arms, a gesture of generously greeting her children,” according to “A guide to art at the University of Illinois” by Muriel Scheinman, assistant professor of art and design.

“I hope (the young people in Urbana) may keep the bronze throne polished by their visits,” Taft said in a letter to a friend in the book.

Taft said in a letter that the University’s motto is fortunate and enabled him to add the other figures, Learning and Labor, to the Alma Mater group.

There are also other sculptures by Taft on campus. When Taft passed away, the University bought his estate and everything that was in his studio. The two women sculptures in front of the main library and the two men behind Foellinger Auditorium are all Taft’s creation.

“We are hoping the Alma Mater has raised awareness with people,” she said, “At least to get people thinking about it and to get some small amount of money to use for simple repairs and upkeep to keep things from ever getting that bad again.”

Claire can be reached at [email protected] and @ClaireHettinger.