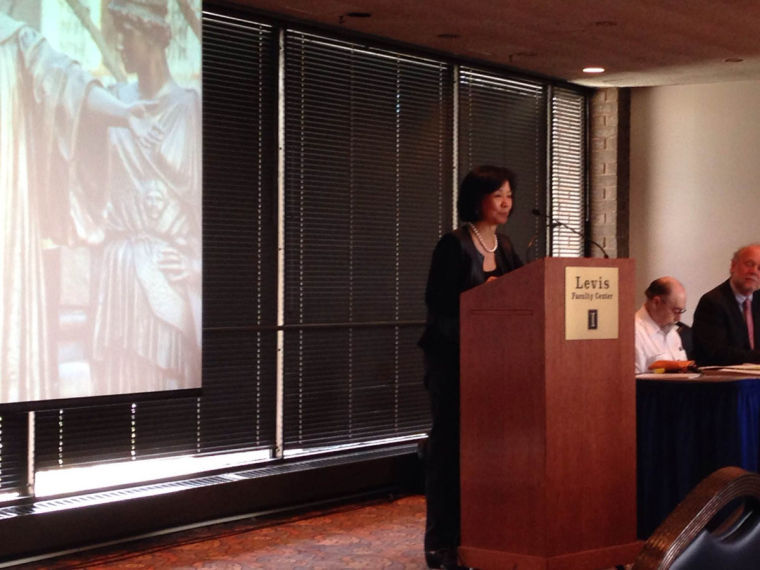 A wave of disgruntled voices echoed around the Levis Center on Monday, as the Urbana-Champaign Senate discussed whether to pass a resolution regarding academic freedom at the University.

“I would encourage senators to vote against it because I think it sends a message to the outside world that we have a problem, and we don’t have a real problem,” said Vice Chair of the Senate Executive Committee Kim Graber.

Some members of the audience protested Graber’s statement.

Despite Graber and a number of other senators advising against it, faculty senators voted 44-to-21 to pass the resolution, which reaffirms the principles of academic freedom, fair employment and appropriate unit governance over curriculum.

The resolution was proposed by a group of senators who raised concerns after professor James Kilgore received notice that his contract would not be renewed for the 2014-15 school year, following reports by various media outlets highlighting Kilgore’s criminal history.

“Many faculty in our departments have taken opportunities to express their concern about these principles as they are being observed or not within the University,” said LAS professor and sponsor of the resolution Kathryn Oberdeck. “Academic freedom is not upheld when outside pressure is affecting employment. Fair employment is not upheld when established University procedures are not the proper resort of questions regarding employment. … Appropriate unit autonomy is not upheld when units hear, without explanation, that their own overseen courses are turned back.”

At the Senate Executive Committee meeting last Monday, the committee decided in an executive session that discussing the resolution with the full senate would not be appropriate on the account that it is not the business of the senate to discuss individual cases. However, in an extra meeting held on Friday, the executive committee decided to reverse this decision and bring the resolution to the full senate. Many senators still voiced concern about whether discussion of the resolution was fair practice.

The concern that was raised by Aminmansour and LAS professor Joyce Tolliver was that the resolution, which originally requested that senate committees investigate the matter, overstepped the bounds of senate responsibilities.

“It occurs to me that there may come a time in which this senate will discuss particular cases of alleged violation of academic freedom — we are not at that moment,” Tolliver said. “There is every opportunity for the colleague to take his case to the standing academic freedom and tenure committee and/or the FAC if he considers that appropriate. I do not feel it appropriate for the senate to make any kind of judgment based on lack of evidence and lack of a full investigation.”

A few senators that spoke out at the meeting did not know the exact case that the resolution was referring to, but felt that it was a reasonable statement to release at any time.

“I’m afraid I’m not familiar with the particular case of discussion, but my particular reading of the resolution is that it seems like a reasonable statement of the principles to me,” senator Tony Wong said. “My only concern was whether unit autonomy over curriculum and instruction might in some way circumscribe the authority of the senate.”

Senators voiced interest in defending the principles set forward by the resolution, whether they were directly addressing the situation at hand or not.

“It is always important to reaffirm academic freedom and to point out that there is something going on and that we have to have a voice and stand up and say something about it,” senator Jennifer Monson said