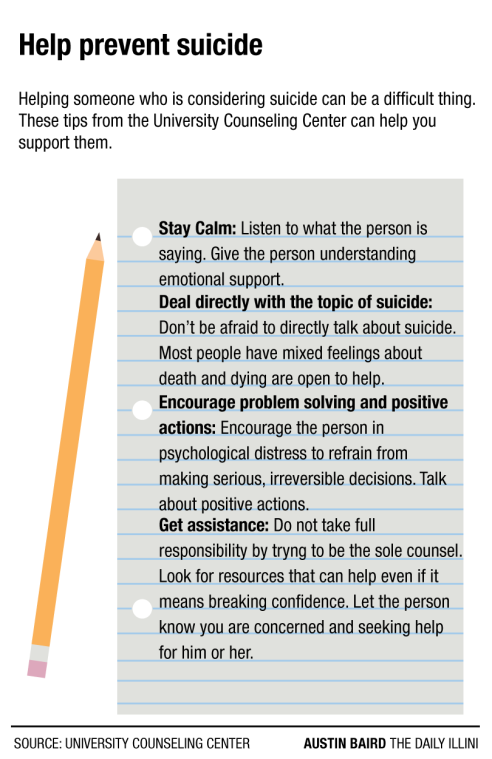 The University of Illinois Police Department sees an increase in calls from students dealing with mental distress, including suicidal thoughts and attempts, at the end of the semester.

University of Illinois Police Captain Roy Acree said calls regarding suicide on campus seem to go in spurts, as police might not get a call for six months, and then there are three or four calls around the same time. He said the department picks up calls from people who are threatening suicide to any degree.

The department consists of a set of Crisis Intervention Training, or CIT officers, that intervene in situations involving the risk of death or danger to a person. Officers respond and determine whether a person is in danger of hurting him or herself or threatening to hurt others.

Officer Brian Tison, coordinator of the CIT program, said that after examination, the CIT team can make the decision to submit an involuntary petition that requires the person to go to the hospital for evaluation.

Acree said the CIT officers, in a sense, serve as the first response to the situation. A report is later sent to the Counseling Center.

“The reason we do that is so that we’re not sitting on an island,” said University Police Sgt. Joan Fiesta. “Let’s say we deal with someone two or three times, we’re not going to sit on an island and hold our responsibility to this person who needed help.”

According to the Suicide Prevention Resource Center, homicide and suicide are the second and third leading causes of death, respectively, for young adults ages 18 to 24.

R.J. McNicholl, co-chair of the Suicide Prevention Team at the University, said late adolescence and early adulthood can be a time when certain psychiatric disorders first emerge. Some of the disorders are depression, bipolar disorder and schizophrenia.

However, he mentioned that the increase in calls to the Counseling Center is not directly correlated with suicide attempt calls.

“If we look at the big picture and see that there is an increased need for services, an increased request for counseling (and) crisis stabilization, some of those may include thoughts of suicide or suicide behavior, but that’s not a direct correlation,” said McNicholl, who also serves as a clinical counselor.

According to the Counseling Center’s website, statements describing feelings of depression, helplessness, extreme loneliness and hopelessness may suggest suicidal thoughts.

Deputy Chief Skip Frost said that there are varying degrees of attempts of suicide.

“We get a call from resident advisors, parents or friends of someone. We get there, we find them in psychological distress,” he said. “There are just a myriad of ways we come across people. Sometimes its people calling us directly and letting us know.”

Fiesta added that the first thing officers do when responding to distressed students is give them medical attention. If the student is threatening to commit suicide or has thoughts, they will be taken to the hospital to get evaluated.

“We’ll try to get them to voluntarily go to the hospital and to seek medical attention on their own,” Fiesta said.

Frost said students that contemplate suicide during this time should seek help.

“People think that because you seek help that it’s a sign of weakness,” he said. “Seek out help, there are resources that are available to you.”

McNicholl said that when a student seeks help, the goal is to provide them with the opportunity to understand their feelings and teach them coping skills while also helping them understand the impact of their behavior on the overall campus community.

Jessica can be reached at [email protected]