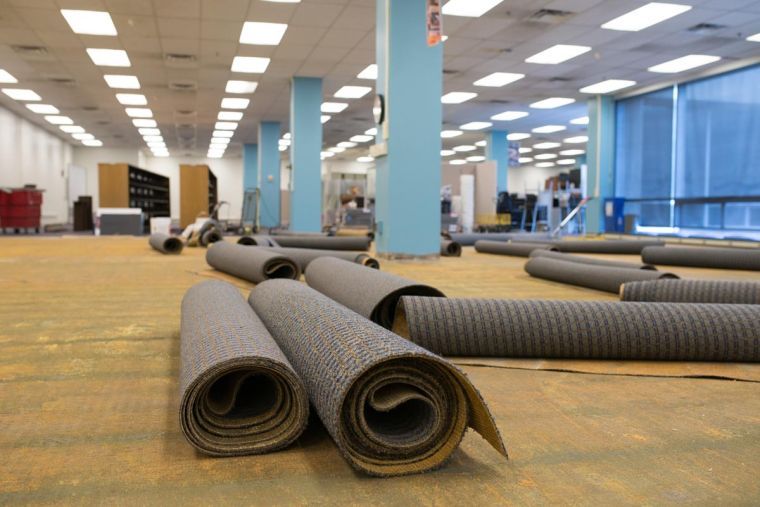 The Undergraduate Library is being recarpeted with tile carpeting, which is easier to clean, before school resumes in the fall.

The University’s Undergraduate Library is undergoing renovations, with the main item on the agenda being the installation of a new carpet.

Work on the library started the day following graduation. The upper level of the library is currently the only level under construction, with the lower level remaining open for patrons.

“Unfortunately, we can only do the upstairs right now,” said Lori Mestre, head of the Undergraduate Library. “The lower level also needs to be recarpeted, but we’re gonna wait a couple years, we have to get funding for that. It has been on the agenda, it’s just a matter of time and budgets.”

A wood-colored linoleum floor will also be laid down in the entrance area of the upper level.

The reason for the linoleum flooring is to give the area a more welcoming feel, and to incorporate some different colors and give the vicinity some warmth, Mestre said.

“Another reason for the entrance to be linoleum is it’s easier to clean,” she added. “With the amount of traffic we get here at the UGL, we wanna be able to just quickly go and clean that area up and not have to worry about it.”

When the Media Commons was created in the library over a year ago, the carpet underneath the new equipment “was just horrible — it was just making it look like it was trashy,” Mestre said. This was one of the reasons it became apparent that the carpet in the library needed to be redone.

“There are spills, there’s worn carpet,” she said. “When they go to clean the carpet, it actually tears it all up. They got to the point where they can’t really do that anymore.”

Mestre and her coworkers took that into consideration when they chose what style of carpeting they would use.

“We’ve gone with the tile carpet which is great, so that if something really horrible happens that they can’t clean, they can just take up the carpet tile and put another one down,” Mestre said.

“With the renovation we are going to add aesthetic improvements that will give the Undergraduate Library a new clean, professional look as well as offer improved spaces and signage,” Kurt said.

With the renovations, there will be new reservable media-enhanced spaces, some with monitors to show content via laptops or mobile devices, as well as improved collaborative spaces.

Kurt said all of these will work together to assist students in fully utilizing the spaces.

The Undergraduate Library surveyed and interviewed students in the spring semester to ask what kinds of improvements they wished to see in the library. Mestre said one of the things students mentioned was that they wanted tables regrouped in a way that would help them study better and to take advantage of the light in the courtyard.

“Some of the students have wanted to have the Undergraduate Library inspire them when they’re here,” Mestre said. “Right now, it’s kind of bland. So they wanted some quotes perhaps of some famous people from the campus or some images of other things happening on campus. We’re gong to be framing some nice images and motivational quotes to put on the columns around the library.”

Along with these requested improvements, the upstairs columns have received a fresh coat of blue paint to add color to the room, and the walls are being repainted as well. New signage is also being added. The book shelves will be swapped out for more modern, “less brown” shelves.

Mestre said student feedback from interviews and surveys is really helpful to understand what kinds of things the library should be doing. That information plays a major role in deciding what to improve during renovations.

“Now’s the time to do it when it’s vacant,” Mestre said. “You can just get a totally different feel.”

Remodeling is scheduled to be done at the end of July, but work is two weeks ahead of schedule. Mestre said she doesn’t know if everything will be completely done by August 1 or not, but said the project should be completed by the beginning of classes in the fall.