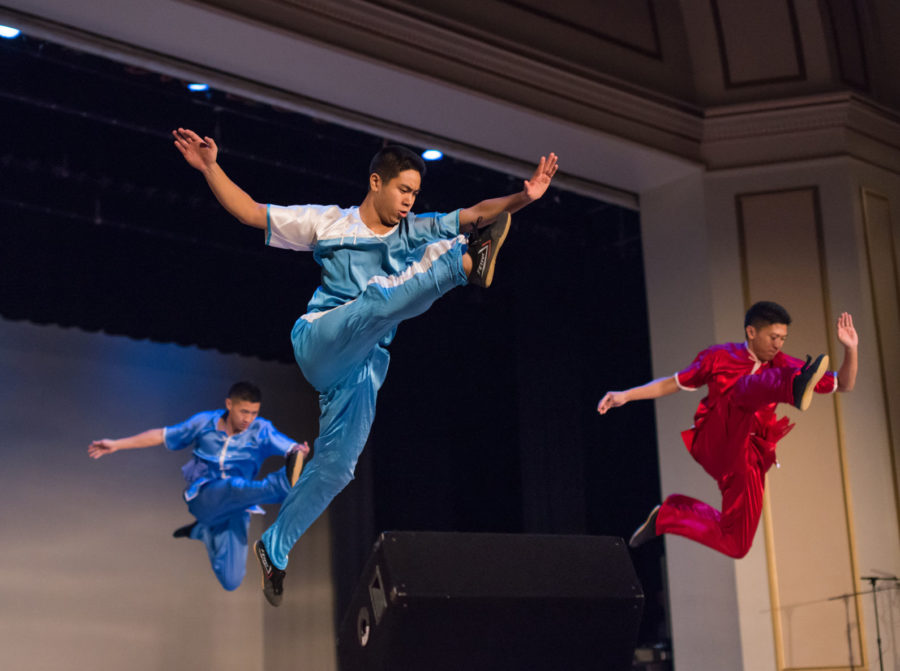 The Wushu Club performs martial arts at the annual Moon Gala, a Chinese cultural event to celebrate the Mid-Autumn festival.

Chinese students came together Saturday to celebrate the Mid-Autumn festival with a Moon Gala at Foellinger Auditorium.

The event celebrated Chinese cultural performances and food, such as moon cakes.

The organizer of the annual event, the Chinese Students and Scholars Association, prepared the show for five months. CSSA is an international organization that aims to help Chinese students adjust to the U.S.

The organization has over 100 chapters at universities across the nation.

The number of international students in the U.S. increased by 7.2 percent in 2012-13, according to a study by the Institute of International Education. CSSA held the 2014 Moon Gala to help over 4,000 Chinese students feel at home at the University during the cultural celebration.

Laurel Prussing, mayor of Urbana, spoke during the event and discussed the history of Chinese students studying at the University.

“The first student that came was in the early 1900’s,” Prussing said. “One of them was the first to study Western Architecture. And another individual studied railroad engineering and went back, reorganized the Chinese railroad international system and now puts China as the leader in high-speed rail.”

Shiyan Zhang, secretary-general of CSSA and the chief director of the 2014 Moon Gala, said hosting the event was very important for Chinese international students.

“While being open-minded towards varied culture, Chinese do seek the chance to celebrate and promote their own culture to alleviate nostalgia and express the love of Chinese culture and custom,” she said. “This event acknowledges the traditional Chinese culture as well as the creativity of the young generation.”

Zhang said she is dedicated to providing opportunities for the campus community to explore Chinese cultures at the University. She said this can be done by building friendships with the Chinese community, sharing an active attitude toward people with diverse backgrounds and showing respect to different cultures and customs at the same time.

Over a dozen musical groups, featuring classical and popular culture, performed at the event. Some of the acts included the Chinese and Western instrumental ensemble Jasmine Field, which is comprised of 14 Chinese students.

The Gala also included a light show, which featured students wearing tubes filled with brightly colored light. In three parts, students demonstrated a series of stories that represented the journey that international students experience when they choose to study at the University. The stories told were concerned with working to pass the required tests, enduring the sadness of being away from home and breaking up with significant others, due to a long-distance relationship.

“(The Chinese YoYo) was totally impressive,” said Julie Misa, director of International Student and Scholar Services. “That was an absolute feat of acrobatism, coordination and showmanship. It was very exciting and fun to watch.”

According to the Division of Management Information, Chinese students account for the largest proportion of international students, nearly 60 percent. Approximately 200 staff and students worked together to put on the Gala and roughly 2,000 audience members attended the cultural event.

Liyuan can be reached at [email protected]