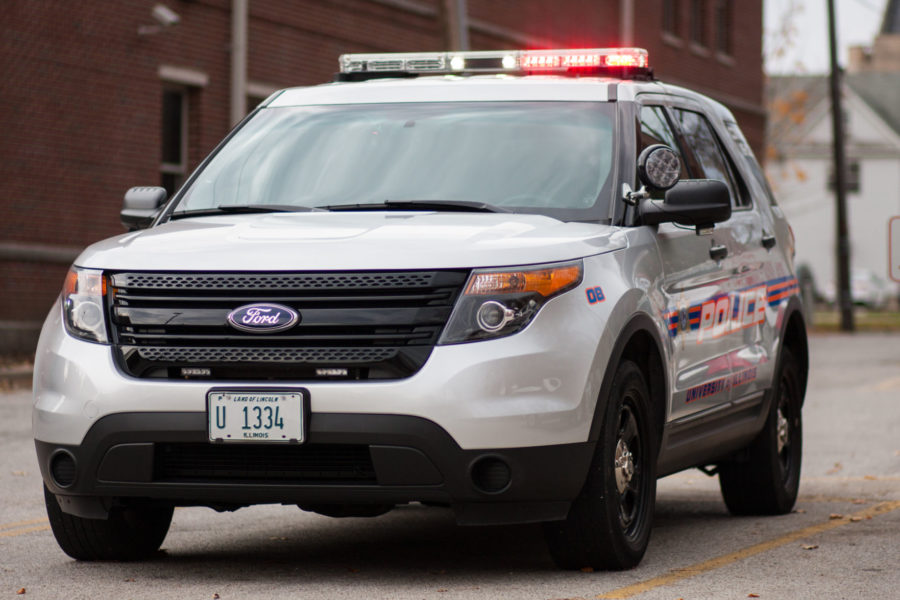 A UIPD police car sits in the parking lot at the Division of Public Safety building on Monday.

The Champaign Police Department announced 12 incidents of mob action and robberies occurring near campus, in a press release Oct. 20.

To ease students’ heightened concerns, Skip Frost, deputy chief of the University Police Department, said they are working with local police departments to address the issues.

Lt. Jim Clark, Champaign Police south district commander, said the amount of police officers doubled this week. Although the amount of officers working varies by day, he said they move several officers to different parts of campus areas at night.

Regarding the implementation of undercover police officers, Frost said that the police departments are focusing on identifying and following people who may have exhibited behaviors that hint toward criminal activity. He said undercover cops could be deployed at all hours of the day.

“The simplest way to put it is, when people don’t know that we’re uniform police officers, it’s kind of hard for them not to commit the crimes,” Frost said.

Clark said undercover cops receive the same basic type of training as uniformed police officers, and are undergoing surveillance on possible subjects. Additionally, they watch to make sure people are not walking by themselves. He said Champaign has implemented undercover officers numerous times before.

If the undercover police officers are not there when crime strikes, Frost said that the uniform police officers would be there immediately once the crime has been addressed.

“Officers not in uniform are not specifically tasked with responding to immediate calls,” Frost said. “They are using their own time to find people who may commit crimes like these.”

Frost would not disclose information regarding undercover cop strategies, in order to maintain the program’s effectiveness.

However, he said he feels the new strategies are ensuring a higher level of safety on campus.

“Student patrolling officers are the extra eyes and ears for police and medical personnel,” Johnson said. “They also report any suspicious activity or criminal behavior through SafeWalks in areas all over campus.”

Bryant Seraphin, criminal investigation division commander for the Urbana Police Department, said the city has yet to deal with heightened crimes, including group mob activity, which the city has previously dealt with. Once December hits and cold weather settles in, Seraphin is expecting a decrease in crime.

With a student patrolling team of about 30 to 40 students, the team is working closely with the University and Champaign Police Departments on campus through programs such as SafeWalks, Johnson said.

There are usually five to 10 requests for SafeWalks at night; however, over the last month, requests increased to 15 to 20 per night, Johnson said. He added that Thursday, Friday and Saturday are the busiest nights during the week.

Because the sun goes down earlier in the month of October, SafeWalks now offer its service at 7 p.m. rather than at 9 p.m., in comparison to earlier months.

Although there was a spike of crimes this past month, Clark said if you compare the numbers from last year, the number of crimes has actually decreased this year.

“The reason why it’s been given so much attention this past month is because of the amount of crime alerts and public safety announcements that have been sent out,” Clark said.

Walbert can be reached at [email protected]