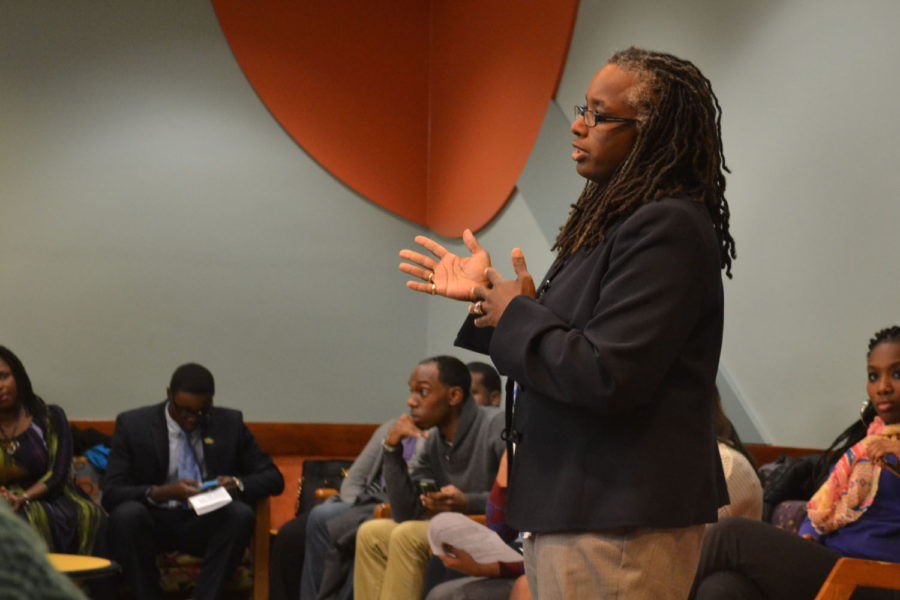 Menah Pratt-Clarke, assistant provost and associate director for the Office of Diversity, Equity, and Access, addresses students during a town hall style meeting held in the Oglesby Lounge at FAR on Tuesday. The University is working to become more inclusive.

The event highlighted some of the current concerns of the African-American population on campus, including black student recruitment at the University, as well as racial aggressions that have occurred in recent months, such as police brutality in Ferguson, Missouri.

In the fall, the University saw a lower number of incoming African-American students.

Ron Lewis, sophomore in Business, said the leadership team started in Spring 2014, propelled by some of the inequalities that were frequently seen on campus.

Though they were not a registered student organization, Lewis said some African-American students initially came together in the spring to form the movement. Together they held a silent protest on the Quad to highlight some of the micro-aggressions faced by black students on a daily basis.

However, the movement is now trying to focus collectively on all African-American affairs, and initiate conversations between University Administration and the black community.

“We pretty much focus on a wide range of things, such as trying to improve the conditions on campus, trying to get students from high school to come down and see the environment and getting more African-Americans enrolled at the University of Illinois,” Lewis said.

Amaka Onwuta, sophomore in Business and member of #BeingBlackatIllinois, discussed a planned projected black student percentage goal for the academic year of 2015-2016, so the amount of African-American students being admitted to and attending the University can be monitored.

Onwuta also mentioned there are plans within the organization to have Project 500 re-initiated at the University.

The Project 500 was an initiative to boost African-American enrollment following the assassination of Martin Luther King Jr. by achieving an incoming class of at least 500 African-American freshmen at the University in Fall 1968.

“So we want to bring our incoming freshman to at least 500,” Onwuta said. “We want to make sure that this project is launched and achieved by the class of 2021; that would be by the time the class of 2017 graduates.”

Students talked about programs geared toward diversity inclusion. They addressed the “i-Connect” workshop, which is mandatory for all students, similar to FYCARE and ACE IT.

“The problem with it is, from what I’ve heard specifically, it’s not as effective as it could be,” Ayanna Williams, senior in LAS, said. “It’s a 2-hour workshop that is required, but there are no consequences if you do not go.”

Menah Pratt-Clarke, associate chancellor and associate provost for diversity, said there have not been any concrete conversations between administration and the leadership team to make Project 500 happen yet, and that it is something they are working toward.

“Recently, the numbers have not been that high, so I think that these students would like to see the numbers increase,” Pratt-Clarke said.

Pratt-Clarke also mentioned that the campus is putting more money into scholarships to help with the recruitment, and talked about the efforts of the “Committee on Race and Ethnicity” to make the University more inclusive over the past two years.