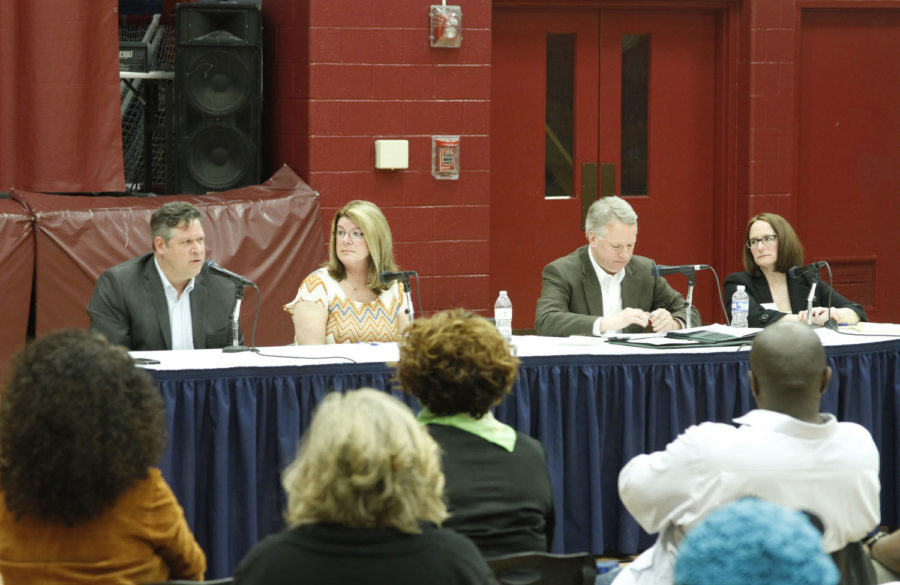 Champaign mayoral candidates Mayor Don Gerard, Karen Foster, Joe Petry and Deborah Feinen take part in a public forum with residents on Sunday. The event was held at the Douglass Community Center and was hosted by The National Association for the Advancement of Colored People and the North End Breakfast Club.

Before residents of Champaign even arrived at the Douglass Community Center for a public forum with the Champaign mayoral candidates, passionate conversations regarding the city had already begun.

During the forum, candidates had one minute to answer questions regarding issues on a variety of subjects. One topic discussed was Gov. Bruce Rauner’s proposed budget cuts. The candidates pointed out these cuts will impact both the city and the University in a negative way, and described proposed solutions to the problem.

“The University is going to be struggling with budget, as all of us are, and they are going to have to figure out ways to sustain themselves,” Feinen said. “We need to see our university thrive and survive because it is our economic engine, and it also is a huge benefit to this community.”

Gerard echoed Feinen’s sentiment in support of the University after community members asked how the candidates would improve the north end of Champaign.

“The greatest opportunity for the north end is going to be the vision for a medical campus at the University of Illinois because that will substantially be North of the University,” Gerard said. “The economic opportunity is incredible.”

The availability of green jobs in the area was also discussed at the forum. Feinen and Petry said the University is vital for producing available jobs and to provide research on green technologies.

“The economic engine in this community is the University of Illinois,” Petry said. “The medical school and research park are pivotal in that regard.”

“I think we can all talk the talk, but I walk the walk,” Foster said. “I walked with people on Green Street when there was violence on Green Street so we could see for ourselves the crime that was happening.”

Additionally. the community posed questions about the referendum to build a new Central High School and increasing diversity within jobs in the city.

The election will take place on April 7.