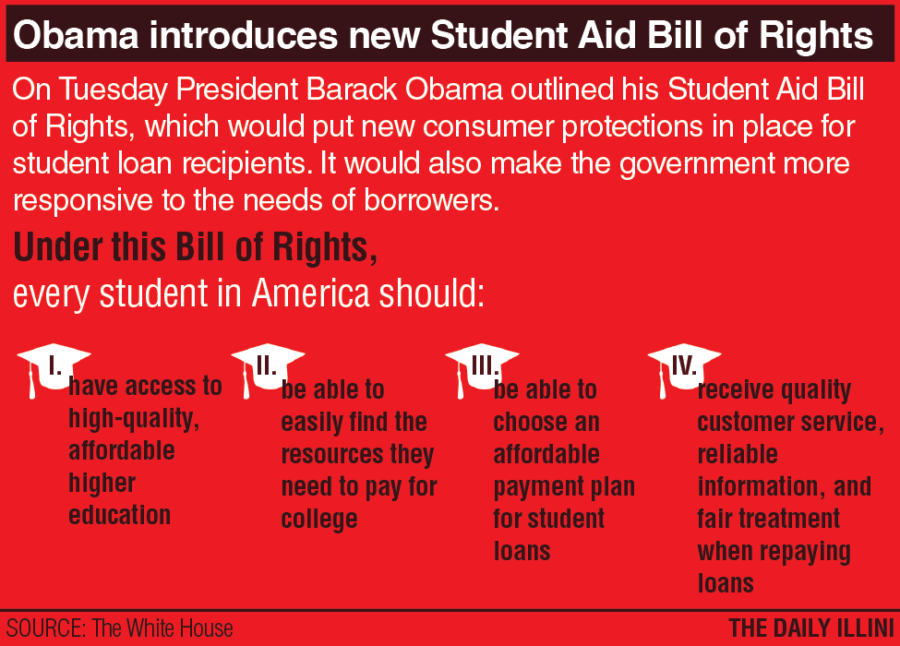 The Obama administration outlined steps on Tuesday to advance a new plan to make college accessible to more students.

For student trustee-elect Jaylin McClinton, junior in LAS, the announcement comes as a refreshing break from the steady stream of news surrounding potential cuts to higher education in Illinois.

“Our government should be supportive of making sure that students can access education and make sure it’s affordable,” McClinton said.

The president’s plan, dubbed the Student Aid Bill of Rights, is comprised of four principles that would increase the accessibility of a degree to students, particularly those taking out student loans.

In a release from the White House Communications office, the Obama administration said that “new requirements may be appropriate for private and federally guaranteed student loans so that all of the more than 40 million Americans with student loans have additional basic rights and protections.”

The plan emphasizes stronger protections for loan borrowers, especially for students struggling to keep up with their payments. It would limit the fees lenders could place on students and keep borrowers enrolled in “income-driven” plans, meaning loan payments would be relative to the borrower’s income.

The Department of Education would then review this feedback, which the administration said would result in faster solutions to problems facing lenders and reform lending policies that borrowers negatively report.

Rep. Rodney Davis, R-IL 13, said he has yet to review the details of the president’s plan, he supports working to make higher education more accessible to students seeking a degree.

“I’m glad to see that the president and his administration are putting a focus on higher education costs, because they’re outpacing inflation, outpacing what families can afford,” Davis said.

To McClinton, the administration’s plan comes at a time when concerns over tuition hikes are particularly pressing. He accompanied Student Body President Mitch Dickey to a town hall meeting on Friday to speak publicly on the impact the cuts to higher education proposed by Gov. Bruce Rauner could have on tuition.

“It coincides with budget cuts here and all over the state, and it really just affirms that education is something that President Obama is very passionate about, and government should be passionate as well,” McClinton said.

After he assumes the role of student trustee in July, McClinton said he plans to do what he can to keep rates from spiking for incoming students and has been preparing himself for the task to come.

“I’m really trying to collect as much information as possible and start strategic planning and build a nice relationship (with the trustees) so that when it’s time for me to be in office, I can hit the ground running on the issues that are important to me,” McClinton said.