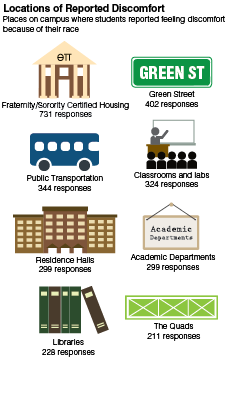 One night while walking on campus Vanessa Gutierrez, Pathways Project Manager, was stopped by two police officers because they suspected she had just completed a drug deal, but her keys were all she had in her hands.

“It’s not about those two officers,” said Gutierrez. “It’s the whole structure that needs to change.”

Stacy Harwood, Margaret Brown Huntt, Ruby Mendenhall and their student research assistants are working to shed light on these issues with the recent release of data collected in 2011 and 2012 in their report “Racial Microaggressions in the Classroom.” The report defines microaggressions as behaviors or verbal remarks that convey rudeness, insensitivity and demean an individual’s racial heritage or identity.

“It’s almost easier to deal with aggression when it’s overt,” said Chancellor Wise, “It’s much more difficult to deal with topics of microaggression where if you’re not careful, you might not even realize it’s happening.”

Of the Urbana campus’ 10,800 students of color who could have taken the survey, over 4,800 participated. The 45 percent response rate was significantly higher than the average online survey response rate of 11 percent.

Actions such as developing critical thinking, increasing intellectual engagement and broadening cultural awareness can enrich higher education, according to the report. However, the report stated, minority students who add to the diversity of the campus often feel unwelcome.

“Going to the classroom is a little bit like a battleground,” said Harwood, “And we need to change that.”

According to the survey, students considered three qualitative questions: when they felt uncomfortable, insulted, invalidated or disrespected by a comment that had racial overtones, when others subtly expressed stereotypical beliefs about race/ethnicity and when others have suggested that they do not belong at the Urbana campus because of their race or ethnicity.

The majority of students who took the survey — 51 percent — reported experiences of stereotyping in the classroom. Twenty-seven percent reported their contributions to class discussions were minimized, and they were made to feel inferior when they spoke. Thirty-nine percent of students reported feeling uncomfortable on campus because of their race and the place most cited for discomfort was “fraternity or sorority certified housing.”

Harwood and her panel of student research assistants held a discussion on the findings in the report Tuesday at the Spurlock Museum. Gutierrez, Tanisha King and Ashley Ojiemwen, Moises Orozco and Shinwoo Choi all participated in the report as student research assistants. Each student shared their perspective on the findings of the study and how the project has affected their lives at the discussion.

“College years are a very important time in our lives and when I experience racial microaggressions, I feel like we don’t deserve this,” said Choi, “We are just here to learn.”

The panel made it clear that their personal experiences are not isolated incidents.

“You’re not alone, and you’re not the only one experiencing these things,” said King.

At the end of the presentation, Harwood opened the floor for audience participation. Topics included institutionalized racism in the community, the University’s informal ownership of the Chief and moving forward proactively. The report and the presentation stressed the importance of students and faculty working together with the administration to effect real change.

“Part of it is trying to get people to talk, think more proactively and not be passive,” said Harwood. “Learn to talk about it. It’s not easy, but it’s worth it.”