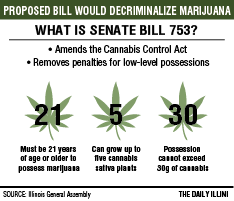 Following national trends, State Sen. Michael Noland, D-22, has proposed a bill to legalize the possession of up to 30 grams of cannabis for recreational use for adults 21 and older.

Under Senate Bill 753, adults would also be able to cultivate up to five cannabis sativa plants.

The bill, proposed on Feb. 3, was postponed in the Illinois Criminal Law Committee on March 25. If passed, current sentences would be reduced and some felonies would become misdemeanors.

Currently, only medical marijuana is legal in Illinois, but there are no dispensaries in the state. Approximately 2,000 of the 2,700 people who applied to the Illinois Medical Cannabis Pilot Program have been accepted, according to its website.

Dan Walsh, Champaign County sheriff, said he believes the legalization of marijuana would not result in any issues with law enforcement.

However, he said the possibility of people driving or operating machinery under the influence of marijuana could be dangerous.

“This is like the use of alcohol in that there can be overuse and usage at unsafe times which people should not do and does need to be prohibited by law,” Walsh said.

Oregon’s Measure 91 is similar to Noland’s proposal. Measure 91 will go into effect on July 1, making recreational marijuana use legal for adults 21 and older and restricting residents to four cannabis plants per household.

The Oregon Liquor Control Commission will license residents to produce, process and sell marijuana. According to the bill, licensing the drug will “prevent revenue from the sale of marijuana from going to criminal enterprises, gangs and cartels.”

Oregon will tax licensed growers $10 per ounce of marijuana leaves and $5 per immature marijuana plant.

Trae Wright, freshman in LAS, said he believes marijuana could also become a lucrative business in Illinois, if it were legal to sell, and lead to an increase in government revenue.

According to a 2013 survey by Monitoring the Future, 36 percent of college students reported they have used marijuana and 5.1 percent reported daily use.

The National Institute on Drug Abuse reports long-term health effects can stem from the use of marijuana.

According to the report, frequent users of recreational marijuana may experience breathing problems, paranoia and limited cognitive ability in people who do not have fully developed brains.