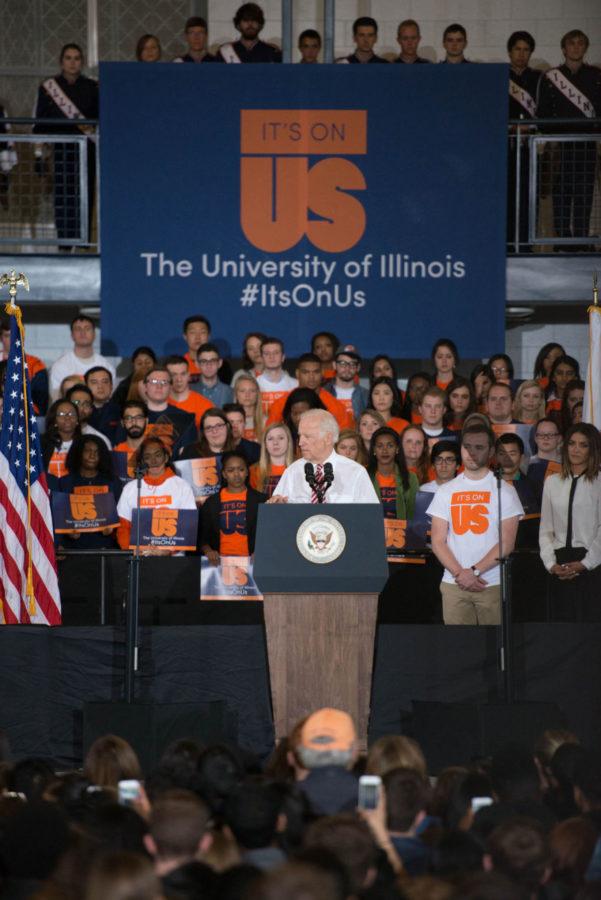 Vice President Joe Biden spoke to University students at Campus Recreation Center East on Thursday about the “It’s On Us” campaign and its developments since its 2014 inception.

Vice President Joe Biden visited the University to celebrate students’ efforts with the “It’s On Us” campaign to end sexual assault on college campuses.

The White House launched the “It’s On Us” campaign in October and the University quickly led the pack in student pledgesmp.

The campaign, which was brought to campus through the Illinois Student Senate, promotes sexual assault awareness by urging students to sign a pledge stating they will take action against sexual assault.

Over 3,000 University students have taken the pledge since October, according to Matt Hill, vice president-external.

Vice President Joe Biden led a rally at Campus Recreation Center East on April 23 to celebrate the success of the campaign on campusmp.

“There is no time, no circumstance, beyond self-defense, when a man has the right to raise his hand to a woman period. That’s the standard,” Biden said. “And any time consent is not given or cannot be given, it is sexual assault.”

Biden spent much of his career in the Senate advocating for an end to domestic violence with his Violence Against Women Act. In his remarks, Biden said he had trouble moving the act through Congress because it was a conversation people did not want to have.

“Our generation must take this issue upon ourselves to hold each other accountable for our actions,” Dickey said. “And to remember — it’s on us, all of us.”

In April, Dickey and Hill traveled to Washington, D.C., to fight the Department of Education recommendation that students should not participate in sexual assault case hearingsmp.

“It’s really important that students be included in these conversations, because it’s students deciding who should and shouldn’t be a part of their community,” Dickey said.

Dickey and Hill also represented the University at an event called Big Ten on the Hill, where they met with other Big Ten student government officers, “It’s On Us” campaign managers and policy leaders in the United States’ Department of Education, Hill said.

While in Washington, Hill and Dickey said staff members from Davis’ office reached out to them regarding amending the current sexual assault bill on the floor in the House of Representatives.

Hill said he would like to see an amendment that allows universities the option to keep students on the panels in sexual assault cases if they so choose.

“We don’t have formal language for an amendment, it’s more just an idea for now, but hopefully we’ll be able to work on that,” Hill said.

The Illinois Student Senate has continued to hold events aimed at preventing sexual assault and raising awareness on college campuses.

Attorney General Lisa Madigan’s Preventing Sexual Violence in Higher Education Act recently earned a majority in the Illinois Housemp. Madigan was also present at the It’s On Us Campaign rally.

“This is a culture change, and changing culture isn’t easy, but we have to,” Hill said. “Students that intervene in situations shouldn’t feel social reprisal — they should feel like a hero.”