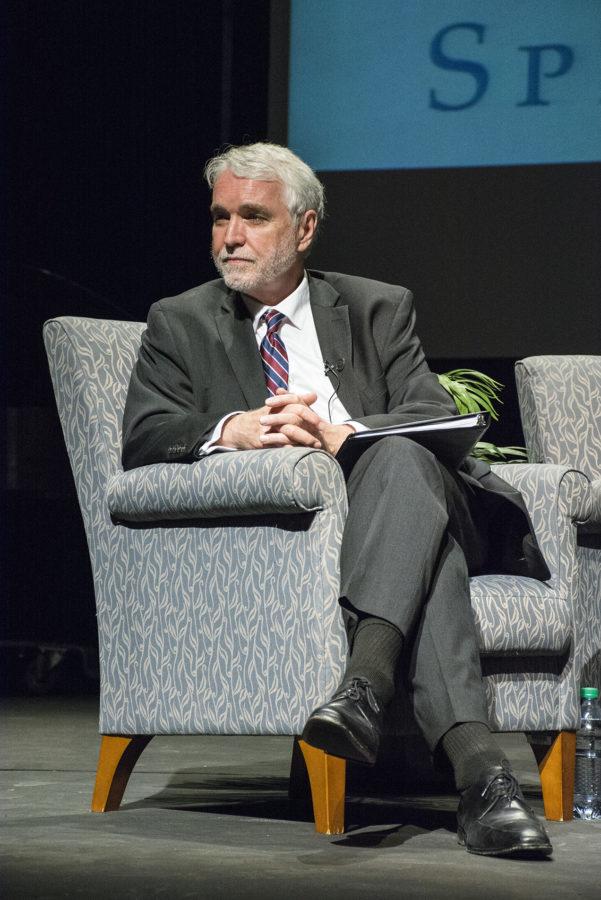 University President Timothy Killeen at a town hall meeting on Monday, May 18, at the Krannert Center for the Performing Arts.

Timothy Killeen began his term as the 20th president of the University on Monday by discussing the University’s future at a town hall meeting and press conference.

“Technically, this is day one for me, but in many ways, it’s day 181 because my name was announced, and since then, I have been really doing what I could do to get up to speed,” Killeen said. “I have been studying up on the University since my appointment in November and January, visiting the campuses, and meeting with the many space stakeholders. … I take every opportunity I can get to meet with students.”

Killeen, former vice chancellor for research and president of the Research Foundation at the State University of New York, said the preparations for his new position confirmed what he already knew: “This is one of the world’s premier research universities, a real powerhouse that transforms students’ lives.”

He said his vision is to continue the University’s improvement, stating that he wants the University to be the “model of the land grant’s mission into the 21st century.”

In March, the Board of Trustees asked Killeen to develop a University-wide strategic plan that will serve as the roadmap for the future. Killeen said they are currently working on that plan.

“This process will be inclusive; many voices will be at the table,” Killeen said. “There will be transparency, many drafts. We seek ideas from all of the stakeholders, capitalizing on the wealth of knowledge and experience across the campuses.”

At the town hall meeting, which took place at the Krannert Center for the Performing Arts, Killeen said the current priority is emphasizing to the state the importance of the University and minimizing budget cuts.

“The public good will be at the heart of everything we do,” Killeen said. “This is a public research university … and the word ‘public’ is very meaningful to me. We don’t want to turn it into a private university.”

When asked about the impact of Gov. Bruce Rauner’s proposed 31.5 percent cut in state funding for higher education, Killeen said the University is not the state’s problem — it’s the solution.

“The largest numbers that you see would damage the University of Illinois,” Killeen said. “We are making every case we can that that should not happen because the intrinsic value of what we do on our campuses to the state of Illinois justifies the public investment of resources.”

Killeen and the chancellors of the three University campuses delivered speeches, focusing on strategies to make the overall future of the University successful.

Chancellor Phyllis Wise said the University has to reinvent itself when facing its challenges.

“We have to gather a comprehensive, educational and scholarly reach that covers the entire spectrum of learning, discovery, public engagement and economic development,” Wise said.

Michael Amiridis, chancellor of the Chicago campus, echoed Wise’s thoughts. He said the University needs to come up with new ideas to thrive.

“We need to be known for innovation in action, putting into action very quickly,” Amiridis said.

Springfield Chancellor Susan Koch mentioned how important she believes it is for the University’s three campuses to collaborate.

Koch also said Killeen’s previous position at the State University of New York dealt with 64 campuses, so it would not be quite as challenging for him to foster collaboration among three campuses.

“I had the wonderful advantage of serving on the search committee, so I had the chance to get to know Tim rather early on,” Koch said. “I’ll just mention one quick thought that resonated so early, and it’s his experience with collaboration.”