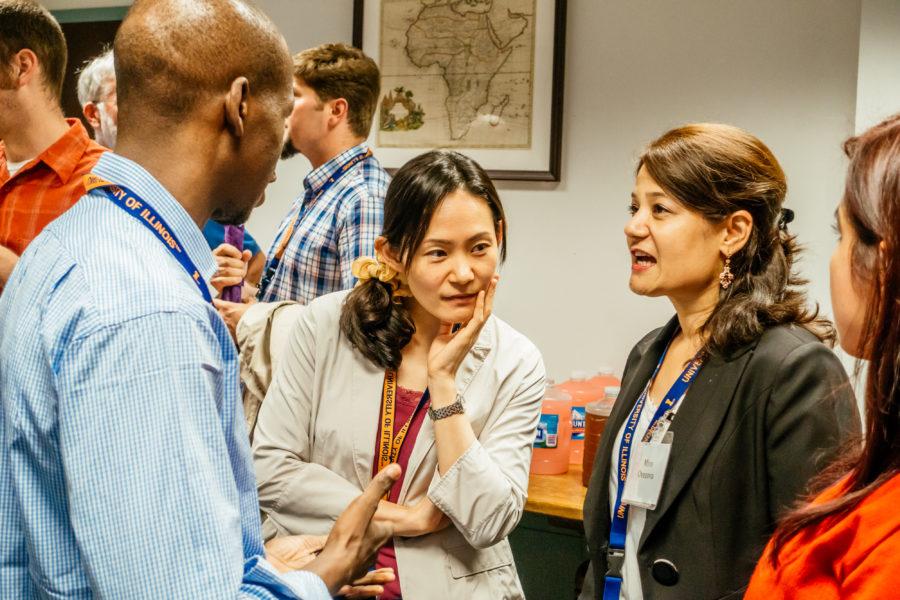 Mive Ovezova chats with international teachers at an indoor sushi picnic in the International Studies Building on Friday, June 26.

The “American Dream” has been talked about, written about, taught, and explored by many Americans over the years. But this summer, secondary teachers from all over the world get to learn about it firsthand at the University.

Every summer since 2013, the Center for Global Studies hosts a six-week program called the Study of the U.S. Institute for Secondary Educators, which is sponsored by the Department of State and the Bureau of Educational and Cultural Affairs.

This year, 20 teachers from countries ranging from Belarus to Uganda are participating in the program. The secondary teachers started arriving last weekend, as the program started on June 21. A few arrived later in the week.

“These programs were designed by the U.S. Department of State to upgrade the teaching, learning, and knowledge about the United States in other countries,” said Elly Hanauer, associate director of the Center for Global Studies.

Participants do not apply directly to the University of Illinois program. Instead, Hanauer said they are chosen by U.S. Embassies and Fulbright Commissions in their home countries.

“It’s a competitive process that’s run all around the world, and they need to fill out a pretty detailed application,” Hanauer said. “They go through an interview process, and then final selection and determination of who goes to which institute happens in Washington at the State Department. So we don’t choose the participants; it’s the State Department that chooses them.”

The secondary teachers will explore American history, diversity, capitalism, and other themes relating to the American Dream. Hanauer said program directors take the participants on trips to Springfield, St. Louis, Boston, Washington, D.C., and San Francisco throughout the duration of the program. She also said host families around Champaign-Urbana show the teachers around.

“They are able to see a wide range of American cities, landscapes, history, and culture,” she said.

Participants don’t have to worry about the cost of the program while at the University. Hanauer said all expenses are paid by the Department of State.

“In some cases, it’s not just the U.S. government that’s paying but also their home country’s government,” she said. “It’s what’s considered a bilateral program … in that sometimes their funding is coming from both countries’ governments to make sure that the participants can take part in the program.”

“In this program, all the teachers are selected from different parts of the world, so I wanted to meet with other teachers and study together on the ‘American Dream,’ which is the main topic of this program,” said Jamila Legsir, an English teacher from France. “I also wanted to learn more about the American culture, and this is the best way to do it.”

Shuchi Bajaj, a history teacher from India, said she thinks it’s important to have an understanding of the diversity that exists in the world. She said she thought it would be interesting to see what she could learn from the American experience during the program.

“The themes of the program are extremely interesting, so I want to be able to relate to those in the context that we are going to be looking at,” Bajaj said. “So my hopes from the program would really be to learn more about America, but also to look at what I can use in my context and country.”