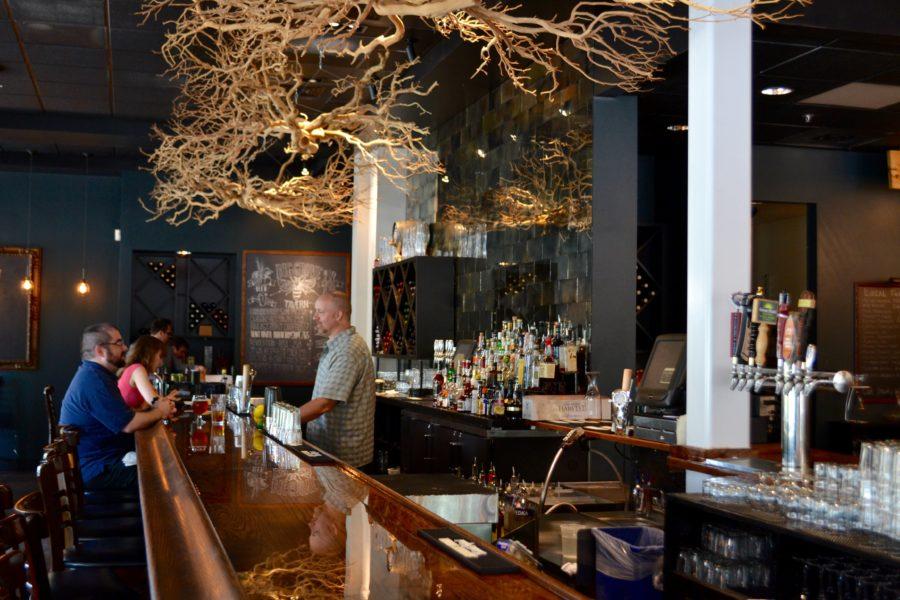 Customers sit at the bar in Big Grove Tavern in downtown Champaign on Thursday, June 25, 2015.


Champaign’s Big Grove Tavern was one of three national competition winners for being the most “green” restaurant.

The restaurant won Green America’s Spring 2015 People and Planet Award. The award recognizes businesses for their dedication to a green economy. Big Grove Tavern was chosen because of its farm-to-table menu and use of sustainable practices.

“There are a number of things that we do that can make us considered a green business,” said Jessica Gorin, Big Grove Tavern executive chef. “The foremost one is that we do use local product, which limits the amount of carbon imprint we have, because instead of having a lot of product that’s been shipped in from California, Arizona or out of the country, most of our stuff is coming from within a hundred miles.”

In addition to using local products, the restaurant abstains from using plastic foam. Instead, it utilizes paper boxes for takeout, which are compostable. Gorin said the restaurant has a strong recycling program and compost piles located in the front and back of the restaurant.

“We have worked with farmers in the past to pick up our compost, so that we can limit how much waste goes into landfills,” Gorin said. “It’s a little bit difficult because farmers have to come here to pick up the compost and farmers are very busy, so it’s hard to find people who are willing to do that. But when we can find someone to partner with, we do.”

Big Grove Tavern first opened its doors three years ago when Gorin moved from San Francisco with the idea of opening a farm-to-table restaurant. Her plan was to partner with farms and use their products in the menu items she created.

“We get about 75 percent of our proteins from farms that are less than a hundred miles away, and that’s year-round,” Gorin said. “During the summer, we’ll get about 75 percent of our produce from local farmers as well. So we’re really making an effort to keep money in the community and to support local businesses, and it’s nice that we got this national recognition for it.”

Gorin said Big Grove Tavern was recognized by Green America because of the number of nominations they entered into the competition. According to its website, Green America is a nonprofit organization that looks at businesses that “create a socially just and environmentally sustainable society.”

Beckie Kane, marketing and event coordinator for Big Grove Tavern, said the award has had a positive impact on the restaurant.

“It’s definitely gotten us a lot of buzz in town,” Kane said. “This has been what we’ve been doing for a couple of years now, and it just sheds light on our business for a lot of people who either haven’t tried us or you know have been here but didn’t really know our whole concept.“

Darren Dienst, one of Big Grove Tavern’s regulars and senior designer at Deep Silver Volition in Champaign, said he didn’t know about the restaurant’s green project until he heard about the award they received.

“I’ve been coming here since they first opened,” Dienst said. “They’re definitely friendly and efficient here, and it doesn’t surprise me that they’ve become nationally recognized.”

Kane said the restaurant might use the money to buy more outdoor patio furniture from a local tree harvesting company. The restaurant might also purchase more kitchen items, such as another ice cream maker, so it can extend its menu.

Kane said receiving the award has made the staff at Big Grove Tavern more self-conscious and that being green is “something they will continue to focus on in other ways.”