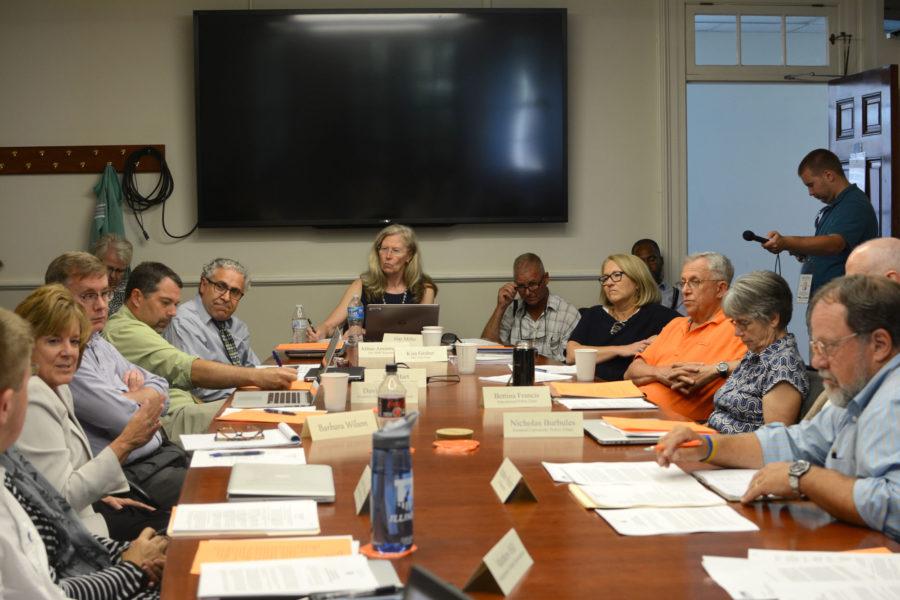 Senate Executive Committee member Abbas Aminmansour drafted an email usage code of conduct for the committee to follow and presented it Monday, following uproar about administrators’ use of personal emails to conduct University business.

On Aug. 7, the University released over 1,100 emails about Steven Salaita, James Kilgore and the Carle-Illinois College of Medicine that were previously excluded from Freedom of Information Act requests.

The code detailed protocol for SEC members on advising and disclosing private meetings and conversations with administrators.

“I hope that we learn our lessons from these emails and last year,” Aminmansour said.

Not all senators were supportive of the draft. Kim Graber, SEC vice-chair, said she felt the code of conduct went too far.

“I don’t think we should put any restrictions on who talks to whom,” Graber said. “I can see people not wanting to serve on the SEC because of it. It makes it a hierarchal freedom of speech issue.”

“Several of us are also on (University Senates Conference), and this code would make it very difficult for us to conduct our business with the president,” Wheeler said. “I can see lots of issues with us doing our jobs.”

Aminmansour, however, defended his positions and said he did not put any restrictions on senators that would make their work impossible.

“It was not my intention in this document to say people could not talk to people,” Aminmasour said. “I wanted SEC members to tell the SEC that they spoke to those people.”

Aminmasour also addressed Nick Burbules and Joyce Tolliver, SEC members whose emails were released by the University, directly, and said if he had been asked for advice from former Chancellor Phyllis Wise on Steven Salaita’s case, he would have brought the matter directly to the SEC.

“I understand the points, but I’m very concerned that we cannot have what happened happen again,” he said.

The SEC agreed to form a committee to revise the code of conduct, and determine if any rules had, in fact, been broken. Acting Chancellor Barb Wilson said the SEC needs to be more open to talking about contentious issues so the campus can move forward.

“I really appreciate this discussion. I think we need to have frank discussions about the challenges we’ve all faced,” Wilson said. “The anger, anxiety, and lack of trust we are experiencing is profound, and we should all talk about it.”