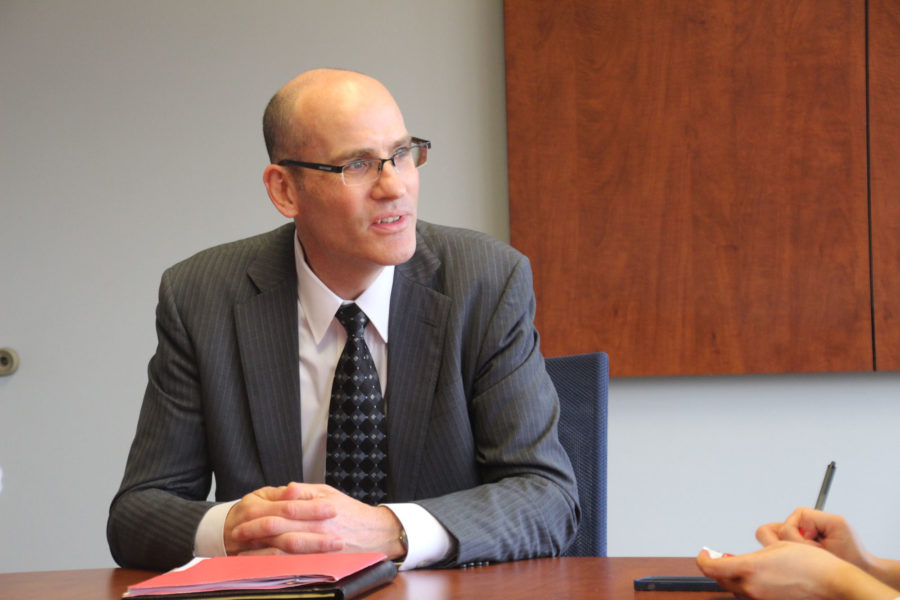 Provost designate Edward — or Ed as his colleagues call him — Feser isn’t going to pretend the University didn’t have a tough year. But he’s not going to harp on it either.

“One of the things we need to do is make sure everybody understands what the record is and how we got to where we are,” Feser said. “We’re going to spend some time trying to set that record straight and admit that some concerns have. We’re really at only one point, which is to move beyond it.”

Feser said he plans to work very closely with Interim Chancellor Barbara Wilson on moving the campus forward — her collaborative style was one of the main reasons he agreed to step up.

He was surprised by Wilson’s appointment, however. The appointment was announced in a University massmail Thursday — Feser said he and Wilson only discussed the position earlier in the week.

Feser’s background as dean of FAA is a sharp contrast to former provost Ilesanmi Adesida’s engineering background. However, he believes his background in FAA will help him lead the campus.

“(FAA has) an unusual mix of disciplines at Illinois compared to many other arts colleges. We have architects, we have performing artists, visual artists, humanists, we have a couple engineers,” Feser said. “So when you’re in fine and applied arts, you get a sense for a lot of different kinds of disciplines.”

Richard Laugesen, mathematics professor, said he thinks Feser’s experience with decreased enrollment in FAA could also benefit him as provost.

“I think Dean Feser will be good at getting departments to think about why students should enroll,” Laugesen said, “I know he’s very aware that while engineering enrollment has been booming, other colleges have had a very different experience.”

Kathleen Harleman, director of Krannert Art Museum and faculty member in the School of Art and Design, will serve as acting dean for FAA while Feser is in the provost’s office.

“I will certainly be there in spirit,” Feser said. “I have a lot of affection for what we’re doing in the College of Fine and Applied Arts; I’m sure I’ll be able to visit the many performances and exhibitions of our faculty and keep track of what’s going on.”

While he serves as provost, Feser said he wants to continue the “many good things” going on, move forward with the creation of the Carle-Illinois College of Medicine and address the unresolved budget.

Katherine Galvin, associate provost for administrative affairs, said she is grateful Feser is willing to step in.

“I have found him to be someone who listens to the opinions of others and seeks to understand various perspectives and concerns,” she said. “He is careful thinker, a good listener and just a very natural, skilled leader.”

In the massmail, Wilson said she received input from over 60 people and conducted 35 face-to-face interviews with deans, directors, faculty members, administrators and students before selecting Feser.

She said Feser’s name came up often and he brings a variety of qualities to the position. Feser has an appreciation for the “comprehensive excellence of the campus,” a solid understanding of academic budgets and wisdom and experience to guide upcoming dean searches, Wilson said.

Wilson also noted he has a calming demeanor and an ability to unite people of different views and articulate the University’s strengths.

He returned to the University in 2012 as the dean of FAA.

His research has received support from national organizations such as the National Science Foundation, and he was named an Illinois Scholar in 2007.

When his time in the provost’s office is finished, Feser said he would like to see the University being led by a “terrific chancellor and provost” and that the campus has moved beyond the year’s controversy.

“I hope that students feel that the door is open,” he said. “We’re really ready to listen.”