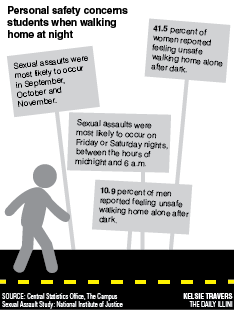 Tweet: Companion app is spreading to campuses nationwide to walk students home. You can get a can of pepper spray, you can carry your keys between your fingers, you can stay on the phone with your mom or you could download the Companion app.

The free app, developed by five University of Michigan students, is teaming up with a number of college campuses to garner data on where students feel unsafe.

The purpose of Companion is to walk people home when they are alone. Co-founder Lexie Ernst, senior at the University of Michigan, said she and other co-founders released the app with a campus environment in mind.

The first version was released out of the Apple App Store in November 2014.

“Crime is such a big issue on campus; crime on college campuses nationwide is way too prevalent. We just felt the need for it,” Ernst said. “Our friends and I, we were always checking in on each other making sure each other got home safely. So it kind of made sense that we would want to make a solution for this.”

Ernst said whenever users have the app enabled and want to arrive somewhere safely, all they need to do is input the address they’re headed toward and add five contacts from their contact lists.

These contacts, whether they have the app or not, are able to note the progress of whoever added them and is on their walk home.

If the user doesn’t make it to his or her destination on time, falls down or starts running, all selected contacts are notified. A button is available for the user to directly dial 911.

Not all students on the University’s campus feel especially unsafe walking home alone at night. Milica Milovanovic, an exchange student in business, said that while some students could feel scared in the dark by themselves, she considers her home country more dangerous.

“I’m from Serbia so the campus kind of doesn’t scare me at all,” Milovanovic said.

Jesse Reiser, freshman in DGS, said he can understand why some people on campus might be scared to walk home alone at night, but, like Milovanovic, doesn’t feel unsafe himself.

“This might sound stereotypical, but especially drunk guys are the ones that end up doing stupid things,” Reiser said. “But I don’t think anyone’s going to come up to a guy just walking home.”

Beyond just walking users home, Ernst said they’re using the app’s data on where users note “I am nervous” to partner with campus security to let them know where people feel unsafe or where areas may be poorly lit.

Ernst said the app has campus representation programs at about 14 schools at the moment, including the University of Illinois. She said that they are also working with other Big Ten schools, including Wisconsin, Indiana, Maryland and Michigan. The app is planning to expand to universities nationwide.