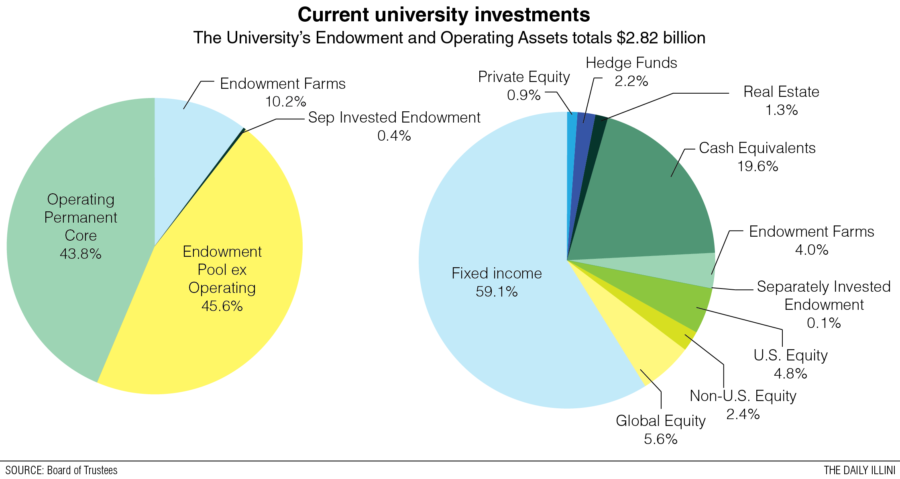 University officials continue to express concern over the lack of a state budget in Springfield but the Campus Faculty Association recently made a claim that the shut down in Springfield does not totally affect the University’s financial situation.

“The budget show-down in Springfield has made no difference whatsoever to the university’s financial situation so far,” the CFA asserted in a report on their web site.

The report goes on to state the $49 million currently owed to the University from the state for fiscal year 2015 can easily be temporarily covered by the University.

Walter Knorr, University vice president and chief financial officer, gave a report on the University’s budget situation and discussed the budget stand-off at the Board of Trustees meeting Thursday.

Bruce Rosenstock, CFA president and associate professor in religion, said the University should be more concerned about the possibility of major cutbacks rather than the budget stand-off.

“In the past such cutbacks were more than paid for by tuition increases and higher admission rates for out-of-state students,” he said.

Knorr said he expects the remaining $49 million from fiscal year 2015 to be paid out by the end of September. He also said the University was able to make payroll with the resources on hand for August, and he expects it will be able to do the same for September.

The CFA said this is typical procedure.

“It is true the state has not begun appropriation payments to the university for the current fiscal year, which started on July 1,” the report stated. “But that is normal: almost no funds were received from the state through August in each of the years 2012, 2013, and 2014.”

Tom Hardy, University spokesman, agreed a remaining payout from the state is not unusual; he said this has been standard procedure for the past five or six years. However, Hardy said the University can only work without state appropriations for so long.

Rosenstock said the University is sitting on several hundred million dollars of funds that are not marked for any special purposes, and the University can use these funds for day to day operations.

According to Knorr’s report, the University’s Endowment and Operating Assets currently totals $2.82 billion. The report states 59.1 percent of the money is invested in fixed income and 19.6 percent is in cash equivalents. The remaining 21.3 percent is invested in a variety of assets including global equity, U.S. equity and endowment farms. Additionally, the total endowment fund is valued at $725.6 million.

Hardy said the University is taking advantage of the reserves it has built up, but these reserves will not last forever, and that at close to $160 million, state appropriation is a vital source of University income.

He also said the state has not accepted the University’s bills for fiscal year 2016 and it will not until the appropriation is set; the appropriations could be decided as late as November and Knorr said it is highly unlikely the budget situation will be resolved soon.

“Research funds we get for grants and contracts can only be used for certain kinds of research,” Hardy said. “What we rely on the state general revenue fund for is to pay salaries of faculty and staff, keeping the lights on and other day to day operations of the University.”