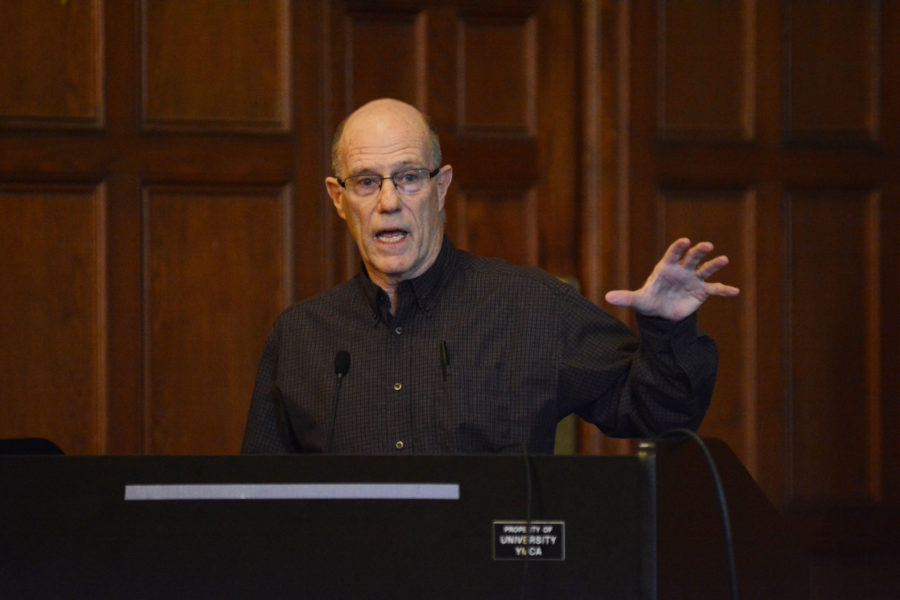 James Kilgore talks about his own life experiences that inspired him to write his book, Understanding Mass Incarceration, at the University YMCA.

Charlotte Green is very interested in the criminal justice system, “to put it mildly.”

Green spoke at the University YMCA Wednesday at an event about Kilgore’s new book, “Understanding Mass Incarceration: A People’s Guide to the Key Civil Rights Struggle of Our Time.”chJT

Kilgore said that he wrote his book, which was published Sept. 1, in an effort to bring awareness to the issue of mass incarceration.

Kilgore served six years in prison for his felony involvement in a 1975 bank robbery and was also a member of the Symbionese Liberation Army, known for kidnapping Hearst Media Company heiress Patty Hearst.http://www.chicagotribune.com/news/ct-james-kilgore-decision-met-20141113-story.html JT

He spoke of the main causes of mass incarceration Thursday and said his hope is that people will try and put a stop to it.

Kilgore was introduced by Tracy Gates, who said reading about Kilgore’s experiences made him knowledgeable about mass incarceration.

“James is both an educator and a social justice activist who teaches at the University of Illinois,” Gates said. “He has lived in this community since 2009, and he has made an impact on this community in many ways.”

Kilgore has published several books, as well as a variety of scholarly articles on this societal issue.

Kilgore said he appreciates the general populace’s growing awareness of the issue as the debate over mass incarceration has turned political.

“This change is inspiring because those of us who have been fighting this issue for years — we’ve been barking into the wilderness,” he said. “Now, this has become a mainstream issue.”

While this has allowed for a greater general knowledge about mass incarceration, he said that he finds the popularity of the issue may hinder effective results from being achieved.

“This is good because we can’t have change without mass awareness, but it’s also unsettling,” he said. “My view is, when the mainstream media and the mainstream politicians get ahold of (this issue) and really sink their teeth into it, their instincts are all wrong.”

This controversy revolves around more than the obvious issue of jail populations, he said.

“Mass incarceration isn’t fundamentally about criminal justice,” he said. “It’s fundamentally a critical part about how the United States has decided to deal with issues of poverty and inequality.”

“I think Champaign County may have the biggest racial disparity in the country,” he said.

This racial imbalance came as a shock to Gates who said she believed racial discrepancies had been reduced over the past several years.

“I didn’t realize that the problem has gotten worse over the past few years,” she said.

She also said that she believes that mass incarceration is largely related to race and economic status.

Along with these problems, she considers the personhood of those who are incarcerated to be a contributing issue of mass incarceration.

“Since I’ve gotten involved in the issue, (an important topic) is talking about people who are in prison or jail as people, instead of inmates or convicts,” she said.

Kilgore said he hopes to enforce “the notion of prisoners as full human beings, prisoners as citizens with full rights.”

Overall, he hopes those who read his book will actively partake in reducing mass incarceration.

“To read and write books about mass incarceration is fine but to become active in the calls of social justice is divine,” he said.

Correction: A previous version of this article incorrectly stated James Kilgore is a professor at the University. The article should have stated he is an adjunct lecturer. The Daily Illini regrets the error.