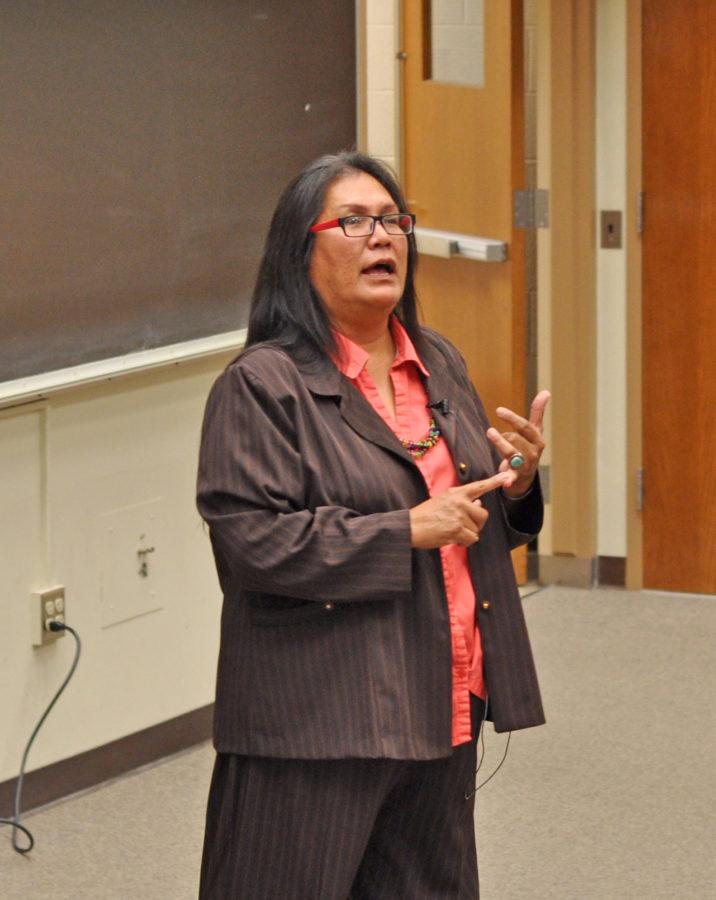 Trudie Jackson (Navajo), a Graduate Student in American Indian Studies-Tribal Leadership & Governance of Arizona State University, speaks about her experiences of a transgender Native American to a group of students at the University of Illinois Urbana-Champaign on Novemeber 3, 2015.

When Trudie Jackson returned to school in 2009 to earn her degree in social work she realized the need to address LGBT health. As a case manager in the human service field, she was supposed to serve 15 clients but ended up with a caseload of over 24 clients.

Jackson, graduate student in American Indian Studies and Tribal Leadership and Governance at Arizona State University, is an advocate for proper health care rights for LGBT identifying Native Americans and spoke about the challenges they face at the Medical Services Building on Tuesday.

Jackson represented the LGBT-identifying Native American community at the American Indian Physician Conference where she gave a presentation to the IHS director.

“I asked: When is the IHS going to take strong, critical matters into addressing the increasing number of HIV/AIDS patients in Native Americans within the country?” Jackson said. “If it impacts your family, your immediate family, will it finally be addressed? Because we are losing American Indians who are asking for help with HIV/AIDS.”

Another barrier to the Native American LGBT community is the concept of having access to proper healthcare and outlets to speak and raise awareness in urban versus rural environments, as many of these sessions are in Washington or IHS headquarters in Maryland.

“LGBT Native Americans or Alaskan Natives may not have the money or the resources to travel to the East Coast to have their voices heard,” Jackson said. “I’m hoping that with these sessions that the IHS will seriously look at developing and implementing LGBT clinics at all IHS sites across the country, so LGBT care can be provided to all American Indians and Alaskan Native.”

Jackson also voiced how at times she is the only Native American LGBT representative working with community partners in Phoenix on raising awareness.

She also spoke about the importance of frontline workers being sensitive and open-minded when reaching out to Native American communities with LGBT individuals.

“The frontline workers, the people that do community outreach, are the ones that really hold the key to the community because they interact with the community,” Jackson said. “When they build that trust with the LGBT community individuals will share that name within their circle.”

“When you walk into a patient’s room and they may appear different compared to what’s on the chart, always ask how they would like to be addressed,” Jackson said. “That is the key because that will make the patient aware that you are open-minded and that you are non-judgmental in the LGBT community.”