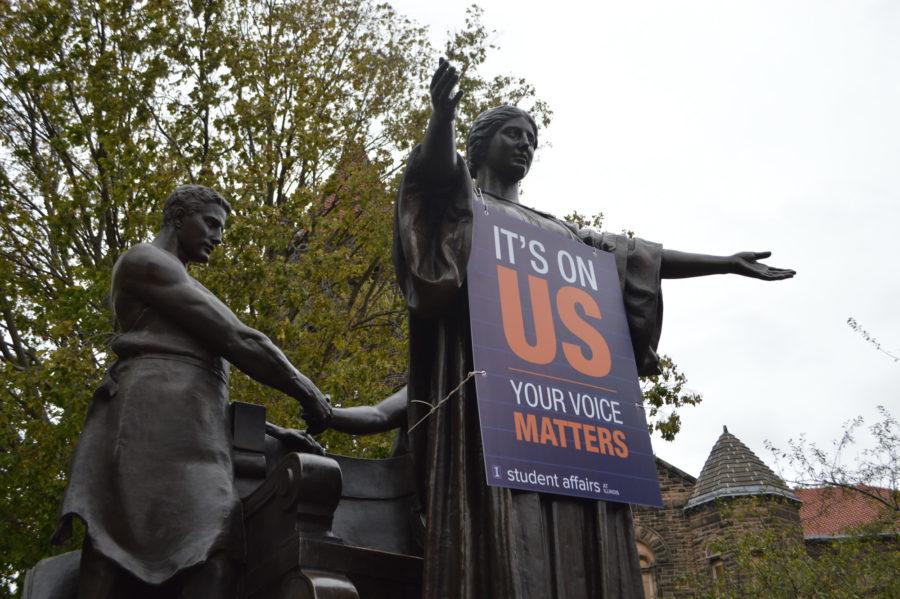 The it’s on us campaign raises awareness for sexual assault by the Alma Mater on Oct. 29, 2015.

The spattering of orange and blue t-shirts with the statement “It’s On Us” is found across campus on students who signed a pledge to prevent sexual assault last year.

This week, “It’s On Us” shirts will again dominate the campus with a purpose different from most t-shirts — to support victims of sexual assault and raise awareness about assault in the U.S.

Students who take the pledge this week to stop sexual assault as a part of the White House’s National Week of Action initiative may receive one of the 1,000 t-shirts and 3,000 stickers.EJ

“I hope that when survivors see this campaign on shirts or on flyers, that they’re feeling like they’re in a more supportive community than ever before,” Hill said.

The week of action, which is sponsored by the “It’s On Us” campaign and will feature events to raise awareness about sexual assault.

“I’ve actually been a victim of sexual assault and it’s something very important to prevent it,” said Lisa Michalowski, senior in LAS.EJ

Michalowski said she plans to sign the pledge on the Main Quad this week and participate in the week of actions events.

“People in college think they’re invincible but they don’t realize they’re not until something like sexual assault happens,” she said. “It’s something I wish no one ever has to go through.”

“What’s really impactful about a week of action is that it’s not just our efforts at Illinois, it’s happening across the country,” Hill said.

Hill said some members of the task force are survivors of sexual assault.

“The campus has a legal and moral obligation to provide students with a safe environment,” he said.

The University participated in the national week of action in the spring and fall semesters last year. However, this year, the student senate intends to reach more students.

Annalisa Roncone, sophomore in LAS and member of the task force said last year the pledge drives were mainly held on the Main Quad or in the Ikenberry Commons.EJ This year, the drives will be held every day of the week and in a variety of locations, including the Undergraduate Library and Business Instructional Facility.EJ

She said that the week’s events are a way to educate students about sexual assault and to keep the conversation going. Some of these events will include a documentary showing, a Twitter “town hall meeting,” a bystander intervention workshop and an acapella performance and a day devoted to support survivors.EJ

Hill said the purpose of the week is to continue working toward a culture change.

“The issue itself is important everyday on campus,” he said. “We shouldn’t be creating a safe and supportive environment for survivors just this week, it should be every day.”