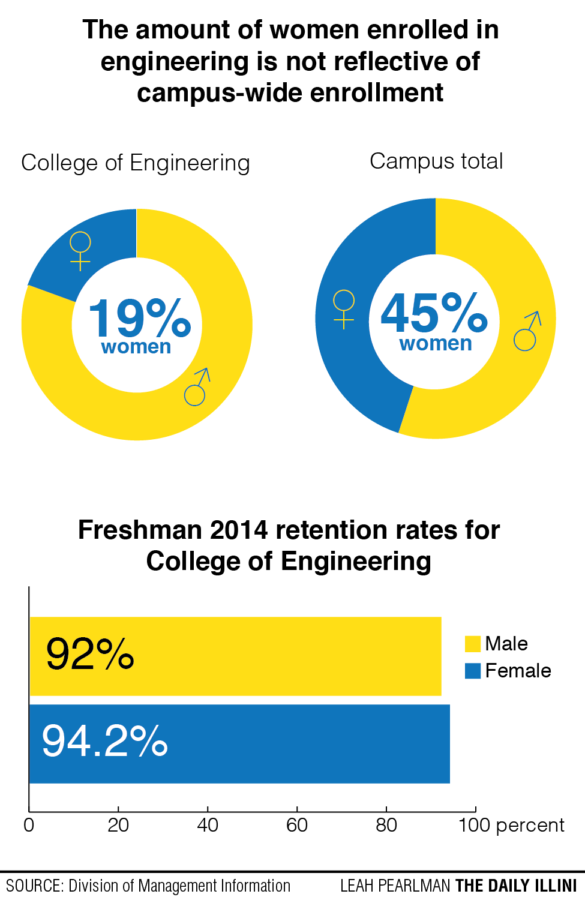 Less than 20 percent of students enrolled in Engineering are women.

Although according to the Division of Management Information, the enrollment of women for Fall 2015 is up when compared to past years.

The issue of inadequate representation for women in engineering strikes a familiar note for Ashley Williams, senior in bioengineering and president of the Society of Women Engineers or SWE.

“Definitely, the percentage and amount of women in engineering needs to be improved,” she said. “It’s still pretty dismal.”

The low percentage of women makes it difficult for Williams to feel represented in her field of study. The apparent lack of diversity doesn’t help.

“Being the only black woman in my classes, that can sometimes feel a little bit alienating,” she said. “It’s sometimes a little challenging in terms of being the only person. Sometimes it makes me feel like I have to represent my race or my gender … which can be pretty stressful.”

Williams said she has decided to use her situation to inspire other women to pursue engineering.

“It just makes me more passionate about increasing the numbers,” she said. “I don’t want other people to have to feel that stress of having to represent more than just yourself.”

There are gender biases attributed to the STEM fields that can make it difficult for a woman to pursue these programs, Pitts said.

“I do think that because of some of the biases … fewer women than men enter science and engineering fields,” he said.

Women had a slightly higher graduation and freshman retention rate in the College of Engineering, despite the issue of female underrepresentation.

The College of Engineering hopes to improve the number of women in the college by encouraging young women in high school to pursue the field.

“More high school women are being encouraged to choose engineering as a course of study in college,” said Susan Larson, assistant dean and director of Women in Engineering. “Outreach and recruiting efforts by the College have increased for academically talented students who are underrepresented in engineering.”

This academic commitment only adds to the diversified classroom environment the College of Engineering hopes to achieve.

“We want our students to be exposed to different cultures, different ideas, different backgrounds,” Pitts said. “So that’s part of our goal, to try to increase the number of females, the number of underrepresented minorities in the College of Engineering.”

This diversification will only increase the innovation the college is known for, Williams said.

“Increasing the amount of women in engineering … only enhances the way that things are taught,” she said. “Having a diversity of people is never a bad thing. You have a greater chance of making something that is really innovative and really new and really different.”