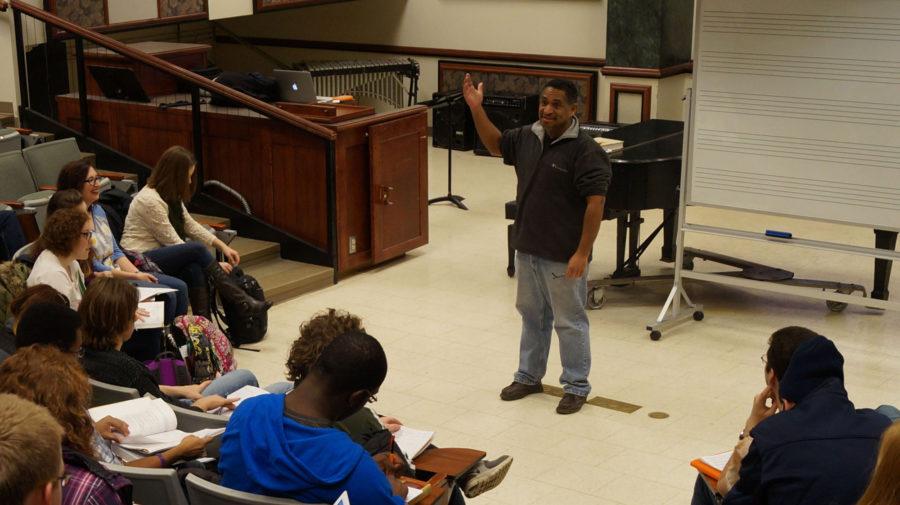 Handpicked from 86 applicants from 26 states, Carlos Carrillo, professor of composition theory, was among 10 composers awarded the Copland House Residency Award on Sept. 15. The award gives Carrillo three to eight weeks during this summer at Copland House in New York to compose an opera based on a famous play by a Puerto Rican playwright.

“The applicants were at the very highest level — astonishing, really — and the variety of stylistic and technical approaches was impressive,” said Christopher Theofanidis, a 2014 Copland House resident and member of this year’s jury.

The award began in Nov. 1998, as a legacy to composer Aaron Copland’s extensive support for fellow composers and his dedication to American classical music.

http://www.coplandhouse.org/media/Press-Release-Copland-House-Awards-2015.pdf“All of our residents are extremely talented in their field, and the award is highly regarded,” said Ian Murdoch, operations and artistic associate at Copland House.

Upon Copland’s death on Dec. 2, 1990, those who knew Copland sought to honor his legacy by transforming his 1940s, prairie-style house, located in three secluded acres, into an artistic space for composers to write.

On arrival at the house, Carrillo plans to start composing immediately.

“To do anything, you need the time to just sit down and work and this type of residency offers that,” Carrillo said.

Residents are fully catered to, with all expenses paid for housekeeping, transportation and other needs; with no distractions, composers can focus on their creative work.

For 30 years Copland resided in the home at Rock Hill, New York, coining it, “my hideaway, my solitude.”

“You are working in his space,” said Carrillo, who recalled working in Copland’s studio in 1998, using the same grand piano and table that Copland had used to compose.

This is not the first time that Carrillo’s lyrical genius in classical contemporary music has been acknowledged.

Carrillo has received numerous commissions and awards, such as the Joseph H. Bearns Prize in Music, Broadcast Music Inc. award and the American Society of Composers, Authors and Publishers award. Both his works and teaching have had international impact.

Copland’s musical accomplishments are his source of inspiration, Carrillo said.