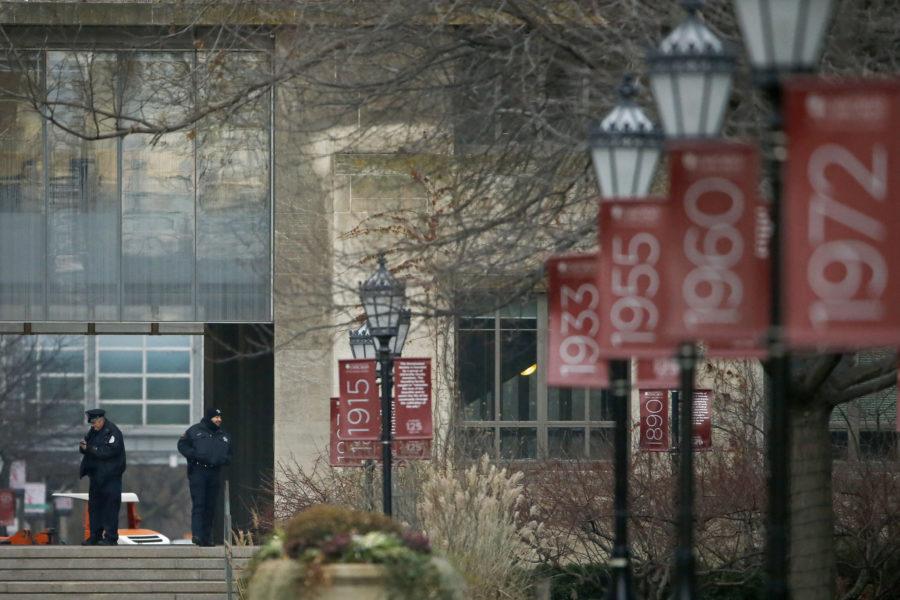 Campus security officers on the Main Quadrangles at the University of Chicago on Monday, Nov. 30, 2015 in Chicago. The University of Chicago announced Sunday that all classes and other activities planned for Monday on its Hyde Park campus will be canceled after the university was informed by FBI counterterrorism officials of a gun violence threat to the campus. (Jose M. Osorio/Chicago Tribune/TNS)

UPDATE (5 p.m.): Jabari R. Dean, a 21-year-old student at the University of Illinois at Chicago was charged with transmitting a threat in interstate commerce according to a press release from the U.S. Attorney’s Office in the Northern District of Illinois.

DNAinfo.com reported that at Dean’s federal hearing Monday, his family said Dean’s threatening online post was a “stupid, silly, ignorant” decision. Prosecutors at the hearing reportedly said Dean did not intend to commit the crimes he threatened.

UPDATE (1:45 p.m.): The Chicago Maroon reported no guns were found in the off-campus apartment of the UIC student arrested in connection with the threats made to the University of Chicago campus.

Charges are pending and the University is cooperating with law enforcement. Threats were not made to the UIC campus but the University has still increased security, according to a statement from UIC.

“We are monitoring this situation closely and are concerned about the impact this has had on our campus and the University of Chicago,” UIC Chancellor Michael Amiridis, said in the statement.

University of Chicago President Robert Zimmer canceled classes and campus activities at the school’s Hyde Park campus on Sunday night, following an online threat made Sunday morning. Zimmer said the university was informed of the threat by FBI counterterrorism. The threat specifically mentioned targeting the campus quad at 10 a.m. Monday.

According to the Chicago Maroon, the commenter made threats on worldstarhiphop.com in response to the death of Laquan McDonald. The commenter threatened to shoot “approximately 16 white male students and staff.”

Zimmer requested “all non-medical faculty, students and non-essential staff are asked not to come to the Hyde Park campus on Monday, or to remain indoors as much as possible if they are on campus.”

Zimmer released an update on Monday afternoon, acknowledging that a suspect was arrested. Zimmer said the security measures put in place will be maintained and the campus will remain closed Monday and he will update the community when further decisions are made.

The university’s medical center will remain open to patients but added security measures will be implemented.