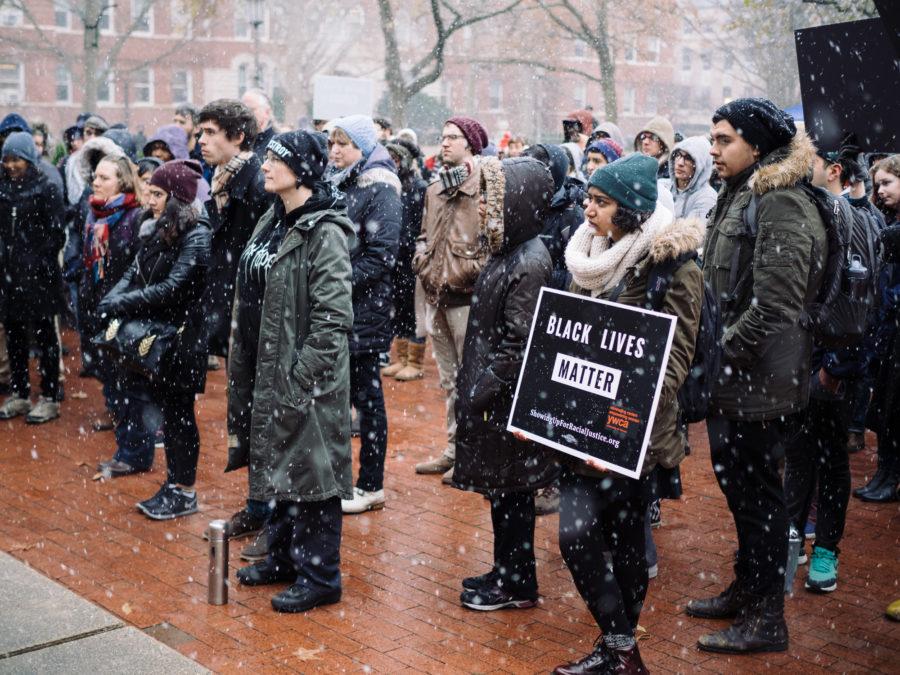 Adorned with red and black arm bands, allies of the black solidarity movement gathered on the quad Wednesday for a “Love and Solidarity” rally. Students and faculty organizations read statements of support for the Black Lives Matter movement and black students, faculty and community members.

The event began with a statement from the host of the event, Kristina Khan, and a rallying chant of “Black Lives Matter.”

One speaker outlined the history of white supremacy and white student union organizations at the University.

“From 1906 until at least the 1920s, possibly later, there existed an officially recognized Ku Klux Klan group here at UIUC,” he said. “Their pictures were in the yearbook, that’s how accepted it was.”

“The original White Student Union that an anonymous coward created two weeks ago… should be treated as (a) terrorist organization,” he said. “They should not be given any platform whatsoever to organize and spread their ideology.”

People attending the rally were encouraged to write their own “Love Letters” that will used in an anti-racism art display that will debuted in the Spring.

Members from several organizations across campus then stood and presented their messages of support with black solidarity and the advocation for the University’s black community. A reading of the love letters written by students and members of the community followed the statements.

Among the organizations present were the Champaign-Urbana Chapter for Showing Up For Racial Justice, the Ethnic Studies Union, Amnesty International and Standing With Her.

“One of the things that white students need to do the most … is come get our cousins,” said Stephanie Skora, senior in LAS and member of the Women of Pride and the Campus Union for Trans Equality and Support. “What this means is that even though you may be here as a white ally in support of racial justice, where are your friends, where is your roommate, do the people in your classes know that this is happening?”

Charlotte Prieu, a graduate student in LAS, drew portraits of black students and faculty to show her support. Prieu said that there are many different ways students can show their support for black lives.

“There are other things you can do … show support, show solidarity,” she said. “It’s not that hard even if you don’t know all the concepts about white supremacy, white privilege.”

“As a white student, I have a lot of privilege and I’m afforded a lot of life chances by my whiteness,” Skora said. “I feel like one of the best things that I can do … is to come out to speak to other white people and to say we as white people have to support black students and have to support black revolution and we have to use our privilege to amplify their voices.”

Allies and supporters of the movement were disappointed with the way University administrators handled the “Illini White Student Union” Facebook page.

“A lot of departments didn’t put a statement out and I think the racism that was shown by the people who started page and then those who wrote on it … departments should have addressed that,” Prieu said. “It should have been talked about in classrooms, they should have sent emails, they should show that they condemned what happened.”

Skora said that she felt the actions of Interim Chancellor Barbara Wilson and Interim Provost Edward Feser were not aggressive enough in the face of threats against black students at the University.

“I think Barb Wilson and Ed Feser need to step up,” she said. “They may be interim chancellors and provosts, but they have the real power of those jobs and they need to take the demands of Black Students for Revolution seriously when they release them.”