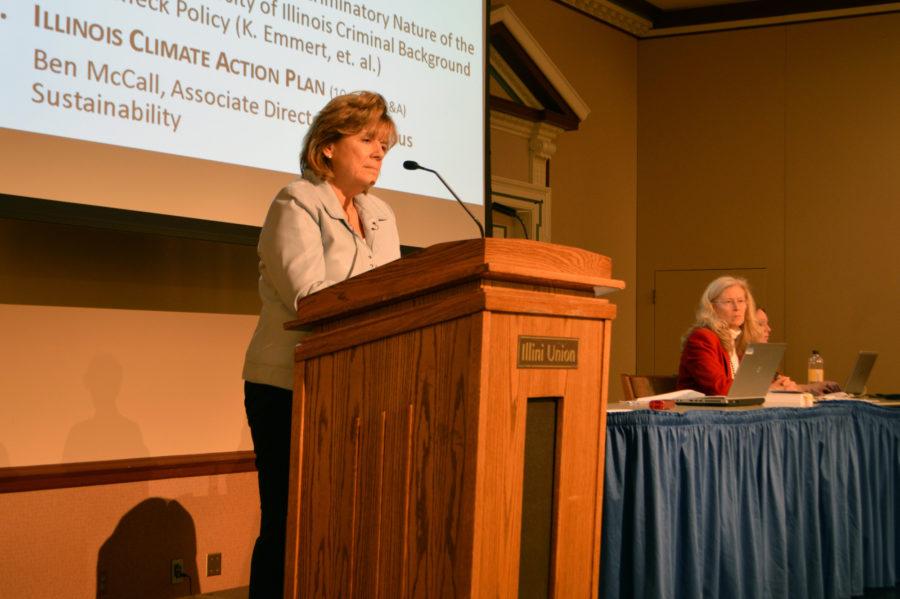 A vote by the Academic Senate on Monday urged change in the background check policy that has been a concern since the Board of Trustees postponed its implementation in October.

In a 55 to 35 vote, members of the senate passed a resolution proposing that all University employees should be required to complete a background check after receiving a job offer but before the start of their actual employmentSO.

The goal of the policy is to protect the campus community, while having a transparent hiring process which allows for those with criminal backgrounds to feel welcome to apply to University jobs, said Edward Feser, interim provost.

Feser emphasized the need for an “individualized assessment for each candidate.” Each hired employee’s background check would look for criminal convictions and be conducted in a way that prevents criminal and racial discrimination, he said.

The policy is due to be implemented in January.SO

Wilson sent a Massmail on Monday, detailing a list of initiatives the University will undertake in the spring semesterSO. The new initiatives come after several vigils and black solidarity rallies were held on the Main Quad in light of the the creation of an ‘Illini White Student Union’ Facebook page.

“That anyone on our campus would think it’s appropriate to create such a site is extremely disturbing,” Wilson said in a Massmail in response to the page on Nov. 19. “We recognize the right to free speech, and we encourage you to exercise that right when you see examples of racism, discrimination or intimidation on campus.”

The University requires several workshops and trainings for both students and faculty in order to increase the inclusivity of the campus, she said.

Discrimination is a relevant issue that should be discussed and worked to end, said Gay Miller, chair of the Senate Executive Committee and professor in Education.

“These are not topics that can be discussed once and then forgotten about,” she said.

Wilson also discussed the continued lack of state budget funding, and its effect on University students.

Due to the loss in funding, the University has decided they “will institutionally cover MAP funding for now,” Wilson said.

On Nov. 10, the University announced that students may have to refund their spring Monetary Award Program (MAP) grants if a budget is not reached.

The continued lack of fiscal support from the state hurts all aspects of the University, and faculty and students should show their support for higher education funding, Wilson said.

Correction: A previous version of this article incorrectly stated that a resolution for a new policy was passed during the Academic Senate meeting Monday. In fact, a resolution stating that the current background check policy is inequitable was passed. The Daily Illini regrets the error.