Espresso Royale has most cafes in CU 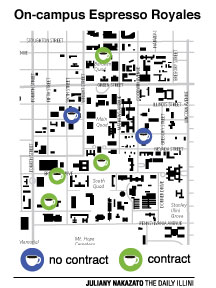 Students looking for a coffee fix or a place to study have a wealth of options. There seem to be coffee shops on every corner, and every Starbucks on campus is within blocks of another.

Espresso Royale, which opened a new café in Grainger Library Sept. 23 after closing its Illini Union location, has more locations than Starbucks, but rarely receives the same ridicule.

“I’ve never heard anybody complain about how many Espressos there are. I think people really like Espresso because it has so much character, it makes you feel at home,” said Fiona Kimble, barista at the Espresso Royale on 1117 W. Oregon St.

There are eight Espresso Royale cafés in the Champaign-Urbana area. Six of these are located on campus, and four can be found inside campus buildings.

“I feel like there are Espressos…everywhere you go. It’s kind of underground, like you don’t really know where they are,” Kimble said.

One of the locations is literally underground in the Undergraduate Library. It’s typically open the latest – from 7 a.m. to 1 a.m. Monday through Thursday.

“They attempt to keep open later as the UGL stays open later,” wrote UGL Head Lori Mestrebr in an email.

The cafés within campus buildings tend to alter their hours based on the hours of the buildings. The cafés located on Oregon and Daniel Streets stay open until midnight, while the café in the Krannert Art Museum only stays open until 4 p.m.

“If the University asks us to stay open longer, it’s something we’ll have to figure out how to do,” said Erin Gillisbr, manager at the Grainger location.

The library cafes face a unique challenge during finals week: they stay open from 11 a.m. Sunday to 6 p.m. Friday. Both will stay open 24 hours, just like the library.

“I think (the University) would be disappointed in us if we didn’t,” Gillis said.

Each store within campus buildings has an individual contract with the University.

Gillis said it can be more difficult for the campus stores because they have to follow requests from the University as well as the Espresso Royale company.

Otherwise, there is only one distinct difference in each café’s operations.

Mestre said the UGL has “the ability to have different items on the menu than other Espresso locations.”

Gillis said this refers to items like the Café con Leche and the Cortado, espresso-based drinks which technically require dine-in cups, which aren’t available at Grainger. Baristas can still make them, but they aren’t on the menu.

Gillis was also the manager at the Illini Union café before it closed. She said it was the oldest University-contracted Espresso Royale and opened in the late 90s.

“People started complaining about the Union and how it switched to Starbucks instead of Espresso,” Kimble said.

The Krannert Art Museum café is a short walk from the Business Instructional Facility, which has another Espresso Royale. The distance is nearly the same between the Illini Union and Illini Union Bookstore, but the Espresso Royales haven’t garnered as much attention.

Gillis said the number of cafés on campus just has to do with Espresso Royale growing its business.

“It’s working out for them,” she said.

The Michigan-based company opened its first café in 1987 and soon spread to other college towns in Minnesota, Wisconsin and Illinoisbr.

Champaign-Urbana has the highest concentration of cafes – Michigan has seven cafés, but they are spread out over two cities.

Espresso Royale has 14 total cafés, but Kimble said she still prefers the atmosphere to Starbucks.

“I always felt like nobody was watching me or judging me,” she said. “I don’t think of Espresso as a chain.”