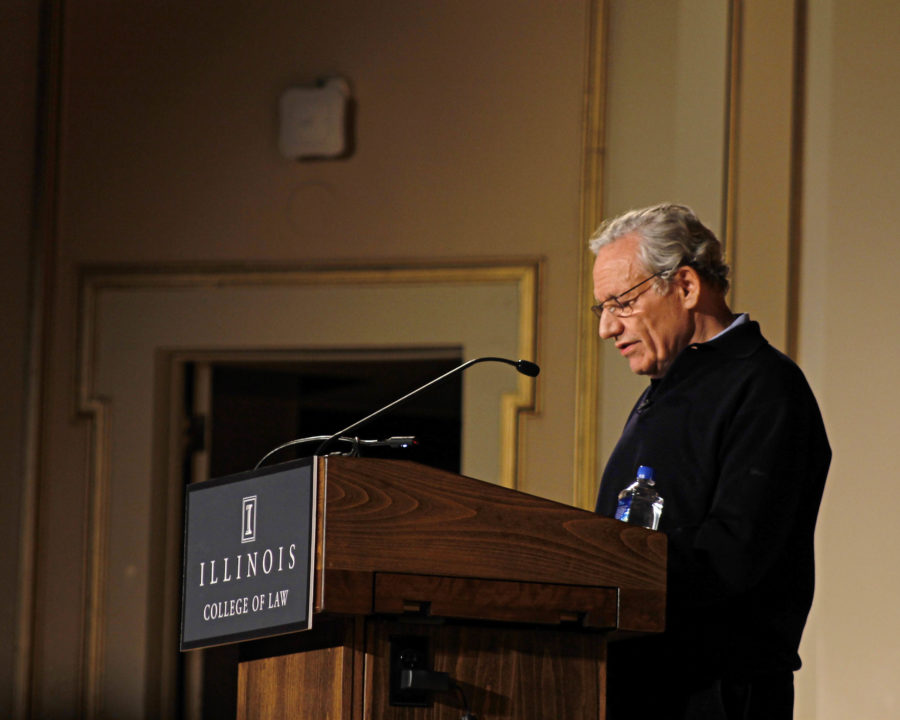 Before Bob Woodward could delve into how Abraham Lincoln relates to the 21st century during a lecture at Foellinger Auditorium on Tuesday, he addressed his outfit choice.

“I do not have a coat and tie on because I got stranded out of Washington because of the snow,” Woodward said. “The dean generously offered his best suit, and I declined. Because my daughter, a freshman in college, said, ‘Now you look like a real professor: underdressed.’”

The Washington Post reporter is best known for his work in unveiling the 1972 Watergate scandal. Over the course of his career, Woodward has written multiple non-fiction bestsellers and has covered and interviewed every U.S. president since Richard Nixon. His writing ranges from the inner workings of the Supreme Court to actor John Belushi’s drug overdose.

Woodward started his career at The Washington Post following a five-year-tour in the U.S. Navy. Two weeks later, he was released by his editor Harry Rosenfield due to his lack of “journalistic experience.” After working at the Montgomery Sentinel for a year, Woodward returned to the Post in 1971 and has been there ever since.

So how did the College of Law and Dean Vikram Amar secure Woodward as the first speaker in its lecture series, “The New Lincoln Lectures: What Abraham Lincoln Means to the 21st Century”?

“The answer also turns out to be quite simple,” Amar said before introducing Woodward at the lecture, “We asked.”

While the fact that Amar’s brother Akhil Amar, co-taught with Woodward at Yale University helped sway Woodward, he said he also realized that Lincoln and the eight presidents he has covered have a lot in common.

“I thought about it… and I didn’t know a whole lot about Lincoln. But I spent the last month reading a lot,” Woodward said in an interview with The Daily Illini. “What I’ve done is distill the characteristics that Lincoln has, and take the eight presidents that I have written books about and tried to show how they used Lincoln, how they learned from Lincoln and in some cases how they failed to learn from Lincoln.”

Woodward, who attended high school in Wheaton, Illinois, graduated from Yale in 1965.

“Yale was hard. It was the hardest I’ve ever studied,” he said. “Except for the Lincoln Lectures.”

As a result, Woodward said he learned Lincoln is still incredibly relevant in the 21st century.

“President Obama said, a month after his inaugural, ‘Lincoln made my own story possible.’ And that is exactly true,” Woodward said during the lecture.

On the contrary, Woodward recalled a story about Richard Nixon going “berserk” when he learned members of the Executive Branch had pictures of John F. Kennedy in their offices.

“Could you see Abraham Lincoln going crazy about someone having a picture of George Washington or Thomas Jefferson in their office? He would say, ‘Oh fine! They’re our founding fathers,’” Woodward said. “Nixon went berserk, ordered all the pictures removed, had to be replaced with pictures of… you guess: him. Now this is a failure to deal with who he was.”

While Woodward is still unsure of whether he will continue his “fly-on-the-wall” coverage with the next president, he noted that 2016 election comes at pivotal point for the country.

“Whoever becomes president is going to have to be someone who can deal with the convulsions in the world. There are many things going on domestically and abroad that are very serious,” Woodward said in an interview with The Daily Illini. “The leadership that is required is going to be large.”

And while media coverage urges people to predict the next president, Woodward cautioned voters to pause and take a look at who’s running.

“You can’t name the future,” Woodward said. “There’s a type of compulsion there — ‘Well who’s gonna win?Who’s gonna do this? Who’s gonna do that?’ I think what’s most important is: who are these people? Who’s Donald Trump? Who’s Hillary Clinton? Who’s Bernie Sanders? That’s the information people need when they go to the polls to vote. Not whether ‘x’ or ‘y’ was ahead in January or February, that’s irrelevant. What is relevant is their character, and biography is their character.”

Woodward said he thinks reporting on candidates’ — and presidents’ — character has been on the decline, an issue he said needs to be addressed.

“I’m 72 now, and saying ‘we need to do more hard-digging reporting.’ You can argue, and people have, that we didn’t know enough about Bill Clinton, George H.W. Bush and Barack Obama,” Woodward said in an Interview with The Daily Illini. “For the past 24 years a lot of people felt that we didn’t get enough and do enough. I think we need to do more.”

To demonstrate Lincoln’s commitment to the good of the country, Woodward quoted a speech Lincoln delivered on April 6, 1860.

“I hope that while man exists, it is his duty to improve not only his own condition, but to assist in ameliorating mankind; and therefore,” Lincoln said. “I will simply say, that I am for those means which will give the greatest good to the greatest number.”