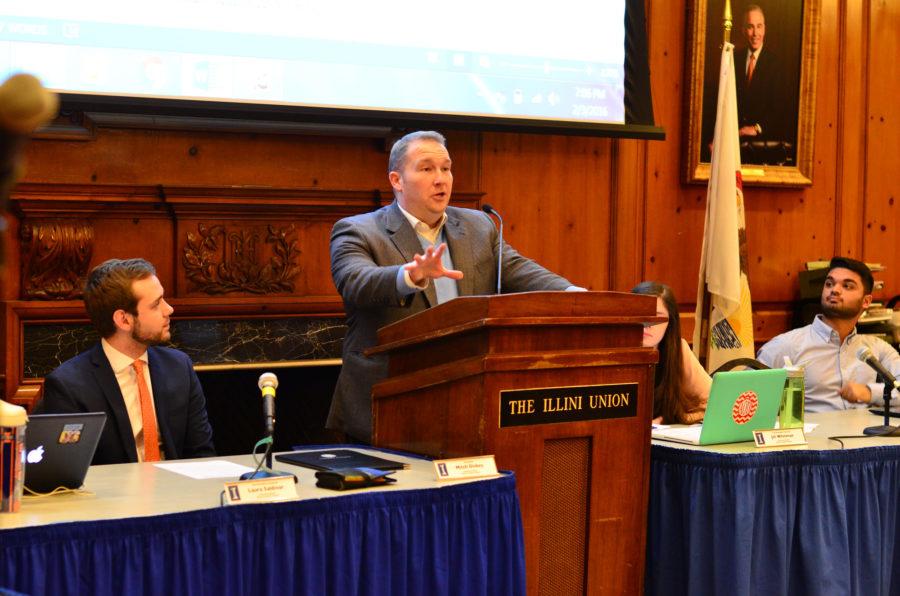 Senator Scott Bennett addresses the student senate regarding financial issues in the Illini Union on February 3, 2016.

“He is probably the biggest advocate for higher education in the state of Illinois and our biggest ally in the state senate,” said Mitch Dickey, student body president as he introduced the senator to the student body representatives.

Bennett said he wanted to visit the student senate to give a summary of what’s happening in Springfield involving higher education.

“Illinois does not have a budget,” Bennett said. “Why is that a problem? Because we are eight months into the new budget year. We are two-thirds of the way through and yet, we are coasting on reserves.”

Bennett brought up the uncertainty of MAP grant funding. He said the house and senate of the Illinois General Assembly have passed the MAP grant but are waiting on Gov. Bruce Rauner to make the final decision.

“The state has not fulfilled its obligation,” he said. “I can’t say it’s because we haven’t tried.”

Bennett said 180,000 students in Illinois rely on the MAP grant and currently, the University owes $60 million without the funding.

Bennett said the largest cutbacks to the University will come from work study programs and financial aid, despite the tuition freeze.

There are more hearings involving higher education and the state budget scheduled for March, Bennett said.

“This is not a partisan issue,” he said. “This should be about the state’s issues. The best and brightest in the state are in places like this – are in this room.”

“There’s a larger conversation that needs to be had,” Bennett said. “Where does higher education funding fall on our priority?”

Bennett said this has been the system for the past 10 years, under democratic governors as well.

Bennett said tuition has almost quadrupled since he attended the University’s law school in 2002.

“There’s no good explanation for that other than we’re not putting our priorities where they need to be,” he said.

Bennett said Chicago State University is about 2 weeks from being unable to afford payroll and Eastern is a few weeks behind that.

“The budget itself cannot be the weapon to hold over people’s heads, there’s too many people to hurt,” he said.

Bennett also said the uncertainty of faculty pensions could negatively affect the university’s reputation as top-tier faculty move elsewhere if their job is insecure.

“Right now, higher education is one of the last things we invest in,” Bennett said. “In the analogy of musical chairs, when the music stops, and there’s no more chairs left, well, that’s the concern of higher education.”