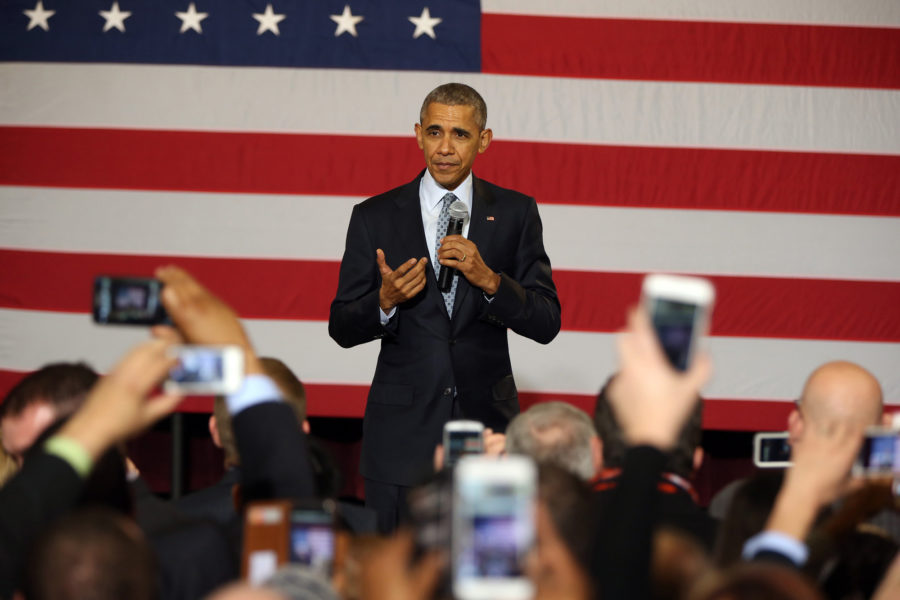 President Barack Obama stops at the Hoogland Center for the Arts in Springfield, Ill., following his speech at the Illinois State Capitol on Wednesday, Feb. 10, 2016. (Terrence Antonio James/Chicago Tribune/TNS)

President Barack Obama spoke in Springfield on Wednesday to an Illinois legislature steadfast in the state budget standoff; just a day after he released his own national budget proposal to an equally partisan Congress.

Obama expressed disappointment with the current state of party compromise, stressing the importance of bipartisanship to state legislators in the city he worked in 12 years ago and where he launched his presidential bid nine years ago,

“The tone of our politics hasn’t gotten better since I was inaugurated; in fact, it has gotten worse,” Obama said. “One of my few regrets is my inability to reduce the polarization and meanness in our politics. I was able to be part of that here, and yet I couldn’t translate it the way I wanted to, to our politics in Washington.”

Decrying a “poisonous political climate,” Obama stressed the importance of the rhetoric used in the current political atmosphere and the race for 2016.

“The point I’m trying to make is I care about fixing our politics,” said Obama, whose second term will end in January 2017. “The reason this is important to me? Next year I’ll still hold the most important title of all, citizen.”

Obama invited Rep. Tammy Duckworth (Ill.-8), who is running against Sen. Mark Kirk (R-Ill.) in the 2016 senate race, as well as Sen. Dick Durbin, Rep. Mike Quigley and Rep. Robin Kelly to join him in Springfield.

In his speech, Obama also took issue with the practice of gerrymandering or restructuring congressional and legislative districts to benefit the party in power, which may play a contributing factor in partisanship.

“When I hear voices in either party boast of their refusal to compromise as an accomplishment in and of itself, I’m not impressed,” Obama said.

Despite Obama’s admonitions, Illinois remains steadfastly divided over the state budget, unable to reach a compromise after going without a budget since July 1. In lieu of a budget, the Illinois legislature has passed piecemeal spending bills, allowing the state to spend money without explicitly setting a budget.

Nationally, Congress has engaged in a similar practice, passing an omnibus temporary spending bill in December.

“I appreciate the president traveling to my district and his message of bipartisanship… but just yesterday, he released his most divisive budget yet,” said Representative Rodney Davis (Ill.-13). “That’s why in the coming days and weeks Republicans in Congress will put forth a budget that balances, addresses the true drivers of our nation’s debt, and creates a pro-growth economic environment.”