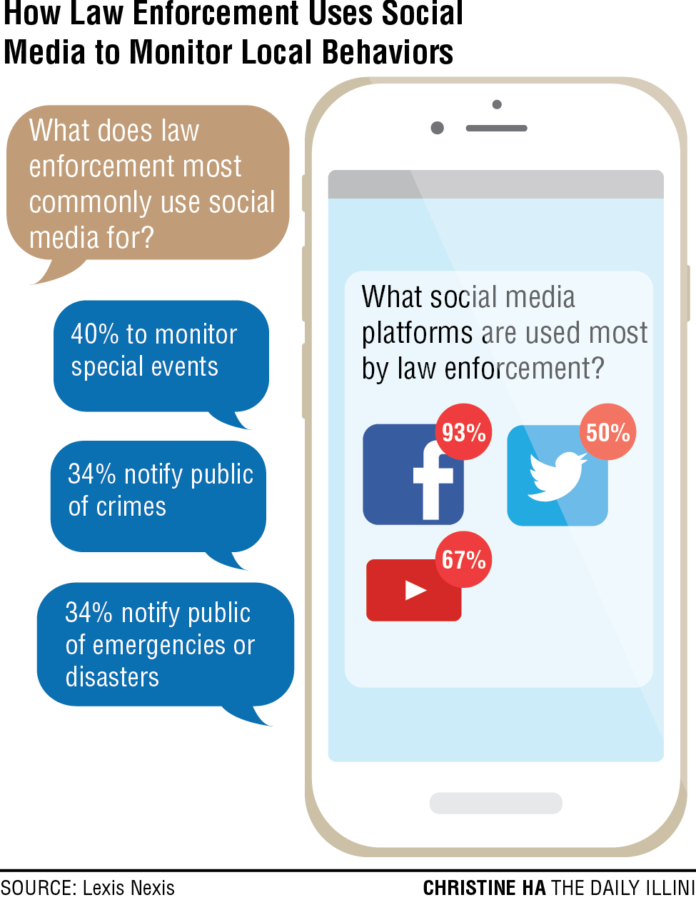 In the early days of Facebook, detectives at the University Police Department bought marijuana from campus drug dealers off of the social media site.

“The police had University of Illinois addresses too, so we were on there. We were browsing through it and [thought], ‘there’s no way they’re selling weed on here,’” Detective Murphy said. “We busted several people.”

While the ease of busting drug dealers on Facebook has decreased, UIPD still stays active on social media to inform the public and help with investigations.

According to a 2015 Gallup Poll, only 52 percent of Americans expressed confidence in the police — the lowest percentage since 1993. With police brutality commonplace amongst today’s cultural discussion, UIPD spokesperson Patrick Wade says social media helps humanize the department.

“When someone interacts with a police officer, very often it is not a positive situation,” Wade said. “If we can use social media as a way to kind of reach out and show more of the good stuff [we] do on a day-to-day basis, that’s a valuable thing.”

The Clery Act requires UIPD to publish daily campus safety notices, but Wade additionally uploads them to Facebook and Twitter to better inform the public. He especially makes a habit of informing the public when no crime occurred on campus.

“When we close a case or when nothing is going on, back in the past a crime alert would go out and all people would hear is something bad is happening,” Wade said. “Now we also tell them good stuff. And by good stuff I mean nothing. Nothing is good in the police world.”

“We get a lot of good security video of crimes happening,” he said. “We can take that video and put it out for the public to see. They can recognize someone in that video [and] help us identify a suspect. That makes our detectives’ jobs a lot easier.”

Rabbi Dovid Tiechtel thanked the UIPD for their work in a statement, saying, “Our deep thanks as well to the professionals at the University of Illinois Police Department, who, together with campus officials, have been extremely helpful throughout this ordeal.”

Detective Murphy, who spoke on the panel, noted that he uses social media to gain information about protests requiring street closures and prevent stalkers in particular.

Murphy noted that, much like selling drugs on Facebook, students openly share locations of ongoing parties. While officers do not use this as a reason to raid a party, they will patrol the surrounding area in an effort to monitor public safety.

“We’re not out there to write tickets all day long. We don’t enjoy doing that, and we don’t get a toaster for writing the most tickets,” Detective Murphy said.