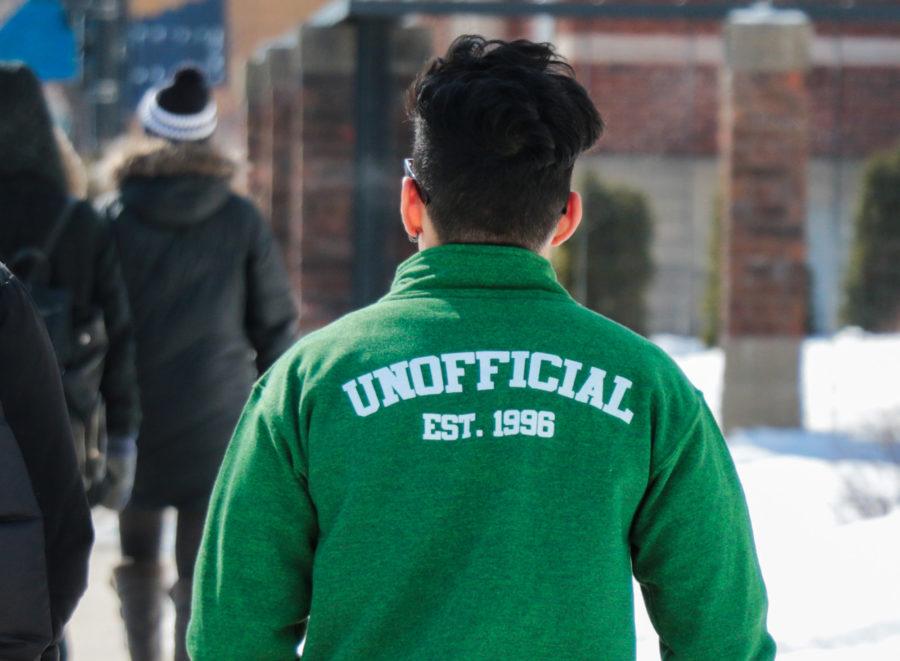 An Unofficial partcipant walks down on Fourth Street on Friday, Mar. 6, 2015.

“Unofficial” is officially on its way to being trademarked — at least when it’s written on the green t-shirts that cover campus during the first weekend in March.

According to the United States Patent and Trademark Office, USPTO, website, the clothing company “UpMerch” filed a trademark application for the term “Unofficial” on Oct. 19. [https://trademarks.justia.com/867/91/unofficial-86791401.html]EJ

The sale of Unofficial-related merchandise by both students and community members has become a growing market in recent memory, even creating controversy surrounding “Unofficial Chiefs,” which are commonly featured on Unofficial apparel. The University’s Campus License Coordinator Marty Kaufmann told The Daily Illini last year that the University can only control the circular depiction of Chief Illiniwek through its trademark.EJ

But the growth of the Unofficial merchandise market may quickly be impacted by the trademark on the term.

UpMerch LLC is listed as the owner of the trademark, though according to a representative from the company, they said they have no affiliation with the Unofficial Shirts brand on campus.EJ The representative said UpMerch bought the trademark “for a corporate customer of ours,” but said the company could not reveal who the customer is. However, within the USPTO trademark files are PDF images with shirts displaying “www.unofficialshirts.com” on the inside. [COPY: http://tsdr.uspto.gov./documentviewer?caseId=sn86791401&docId=PST20160210073405#docIndex=2&page=1]EJ

UpMerch was founded by University alumnus Kevin Alsterda in 2015. Alsterda, who could not be reached for comment, is also known for founding KRA Apparel; Unofficial Shirts was a subsidy of KRA Apparel. [https://www.linkedin.com/in/kevin-alsterda-b442b520, https://www.dailyillini.com/article/2015/03/students-find-success-selling-unofficial-t-shirts]EJ

A page administrator for the Unofficial Shirts’ Facebook page would not confirm any affiliation with UpMerch or the trademark, saying they are “constantly bombarded with questions from the media, we prefer to not continuously provide on the record information.”

The goods and services that Unofficial is trademarked under, according to the USPTO, include, “clothing, namely: tops, shirts, coats, jackets, sweatshirts, sweaters, t-shirts, tank tops, polo shirts and golf shirts; footwear; headgear, namely: caps, beanies, and visors.” On Oct. 22, 2015, the trademark application was “entered in TRAM,” meaning the USPTO has accepted the application and entered it into its database.EJ

As of Feb. 9, the trademark was “approved for pub-principal register,” meaning the final review prior to publication has been completed and the trademark application will be published for opposition. The application was published for opposition on Feb. 10.EJ The trademark will remain in opposition for 30 days until March 11; during this period any person who believes they will suffer due to the registration of the mark can object to the registration. [http://filingfortrademark.com/tarrtrademarkstatusupdate.html]EJ

The trademark is a standard character claim “without claim to any particular font style, size, or color” according to the USPTO.EJ

But some University students are upset with the advertising of the Unofficial Shirts brand and how they target so many groups.

Neil Patel, freshman in Engineering, finds the company’s posts in the ‘ECE Class of 2019’ Facebook group to be unnecessary.EJ

“The group is for ECE freshman questions, not advertising stupid shirts,” Patel said. “I’ve just been blocking the posters one by one.”

“Unofficial has been on campus for so long and lots of clubs do lots of different Unofficial clothing,” Patel said. “They shouldn’t be able to get a trademark, should they?”