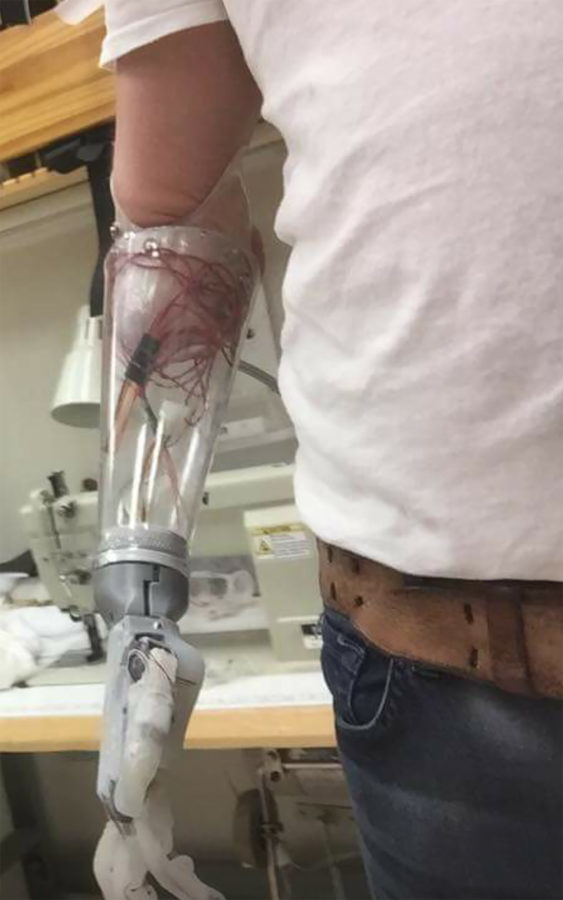 Anderson’s hand was injured while serving in Iraq.

“On October 15, 2005, I was working night shift and it was about three in the morning and 90 degrees. We pulled to where border landing was happening and it was a false alarm — it was an ambush. When we got off the hardball and into the dirt road, the roadside bomb hit our truck and blew up.”

Anderson was trained for that kind of situation, but couldn’t believe he was injured at first. He was rushed to the hospital and doesn’t remember much, aside from one sentence that resonated with him a long time after.

Anderson knew the bone saw was going to be used to amputate his hand.

Following the surgery though, he said was just thankful to be alive.

“I didn’t want the injury to define who I was gonna be,” he said. “From day one, I was gonna define it. I made a mental note to keep pushing on to do what have to do and accomplish what I need to.”

And Anderson has done just that. For the most part, he still does everything he did before the explosion and still does many things on his own.

“I have like six arms in my closet I can use for different things,” he said. “For example I have an arm to work out with, and a prosthetic hand that looks like my own hand.”

One downfall of prosthetic hands, though, is that Anderson cannot feel with them; however, a team of students within the startup company Psyonic MG, is working to fix that.

Psyonic works out of iVenture Accelerator in Research Park MG, and the company’s mission is “to develop high quality prosthetic hands at a low cost, making them accessible to developing nations,” according to the company’s website.

The Psyonic team is working on an upgrade for Anderson’s 3D printed prosthetic hand. The team consists of a wide variety of students, including aerospace engineers, bioengineers, computer science engineers and neuroscience specialist students. Also on the team is Aadeel Akhtar, CEO of Psyonic.

Psyonic has been developing prosthetics for about three years now. Psyonic and Anderson have frequent meetings about what someone like Anderson is looking for in a prosthetic hand, and how to improve designs by having him test the hands.

The most recent prosthetic hand design was tested yesterday. It fit Anderson’s socket and Akhtar was able to work the residual limb in the prosthetic hand. Anderson said this was the most comfortable and weightless prosthetic hand he has ever worn.

The next step is to wire the socket into the prosthetic hand so Anderson will have a sense of touch for the first time in 12 years.

“With my other (prosthetic hands) I would break stuff because I don’t know how much pressure I am putting on it unless I am looking at it,” Anderson said. “This hand is very different because it uses muscle memory, so the muscles in my residual limb are still there. What the program does, if I think about making a fist, certain muscles will be engaged and will move differently so the sensor inside the socket will read those and train the muscle.”

Thus far, Akhtar says the feedback has been great, and the team will keep testing and fine-tuning the prosthetic hand until it is the best it can be. He predicts the final working sensory prosthetic hand will be finished by the end of the year.

The whole project hits close to home, especially since the 3D printing and development are all happened in Urbana-Champaign, Anderson said.

“I am thankful for the team thinking of the next generation of prosthetics, and making it easier to function,” he said. “It shows the engineering aspect and the intelligence of the University and what a world leader U of I is,” he said. They push the limit and strive to be number one, which they are in my mind. There is no university like this one.”