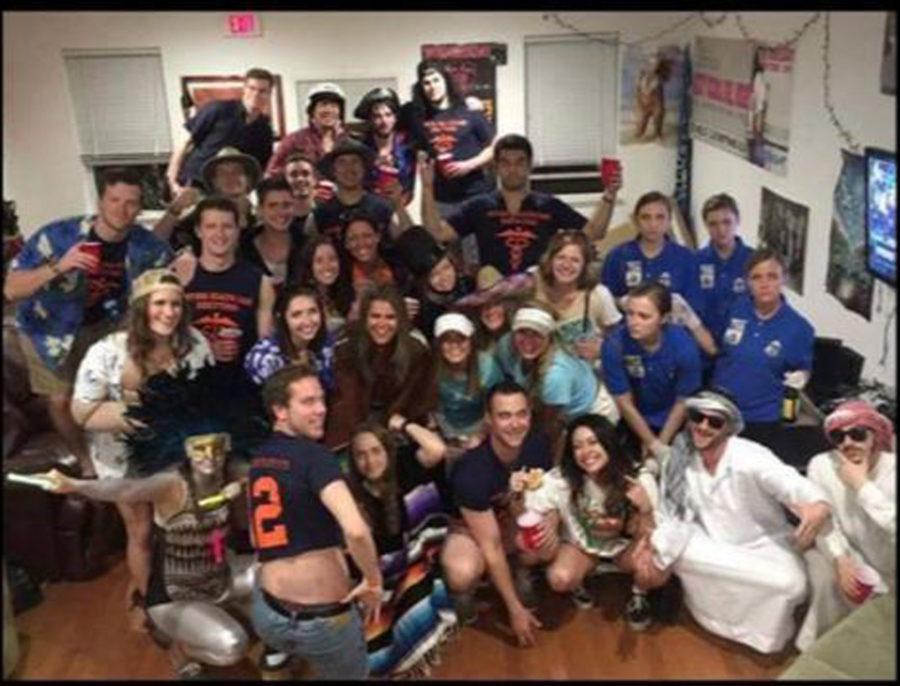 The photo Alpha Phi and Acacia apologized for. Photo courtesy of Muhammad Yousuf.

The Alpha Phi sorority and Acacia fraternity released a statement Thursday night in response to a photo of what activists said showed racist actions.

The groups created a Facebook page dedicated to apologizing for any offense caused by the photo, which showed people dressed in costumes at an event.

The statement said only one of the three photos being shared actually involves members of the two organizations.

The photo is of a “Spring Break” event and was not intended to be racist the statement said. During spring break, the girls wearing TSA costumes traveled to Mexico via airport with a girl pictured wearing a sombrero, according to the statement.

“The individual suspected to be in a chief stance and Native American imagery is dressed as a peacock DJ from Cancun, and had no intentions of mocking an inappropriate mascot,” it said.

Unrelated to the theme, the statement said, the two in Middle-Eastern clothing are of Syrian heritage and wanted to celebrate their heritage by going out wearing keffiyehs. One is an Acacia member.

“We are fully aware we do not get to decide what is seen as racism, it is in the eyes of the beholder,” the statement said. “Our chapters know that other organizations’ have hosted themed parties in the past with insensitive themes, and we try to do everything we can to prevent offending anyone.”

The activists implicated RSO Future Healthcare Executives as well, but only Acacia and Alpha Phi have taken responsibility by issuing the statement. The statement said the RSO had nothing to do with the event in question.

“We would never intentionally plan to harm any individuals or ethnic groups,” the statement read. “We understand in the past other organizations have intentionally offended minorities and we empathize with the grief that it has caused students on not only on our campus, but also across the country.”

A group of independent student activists released the photos and statement on their personal Facebook accounts Wednesday. These activists originally formed a Facebook group in response to the recent controversial pro-Trump chalking on campus.

While the statement claims that the racist undertones of the photo were accidental, Muhammad Yousuf, one of the activists, is not convinced. Both Alpha Phi and Acacia reached out to Yousuf prior to releasing their statement to inform him they were not trying to be racist.

“Until I see various substantial proof that it wasn’t, I have no reason to believe they’re telling the truth and they’re not trying to cover it. It very well could have been an accident, but I don’t see substantial proof either way.”

Regardless of intent, Yousuf sees problems with inappropriate cultural costumes. While the apology noted the two men in Arab costumes are Syrian, Yousuf still saw it as a costume.

“When you see people dressed up in Arab garb next to TSA agents, people don’t know that’s an accident,” Yousuf said. “Even if they do know, there is still a very clear juxtaposition of imagery.”

However, the statement said, “When someone asked to take this picture, which was taken in the member’s home, the two (in keffiyehs) happily obliged to squeeze in, totally unaware of what costume the girls behind them were wearing.”

The photos were released to bring awareness to the “racist undertones,” Yousuf said. The activists will continue furthering discussion of racism on campus and demanding change, he said.

“We appreciate the struggles that those in ethnic minorities face every day in this country and would much rather act as a hand that offers help to all of those in the UIUC community instead one that is pushing people away,” the statement said.