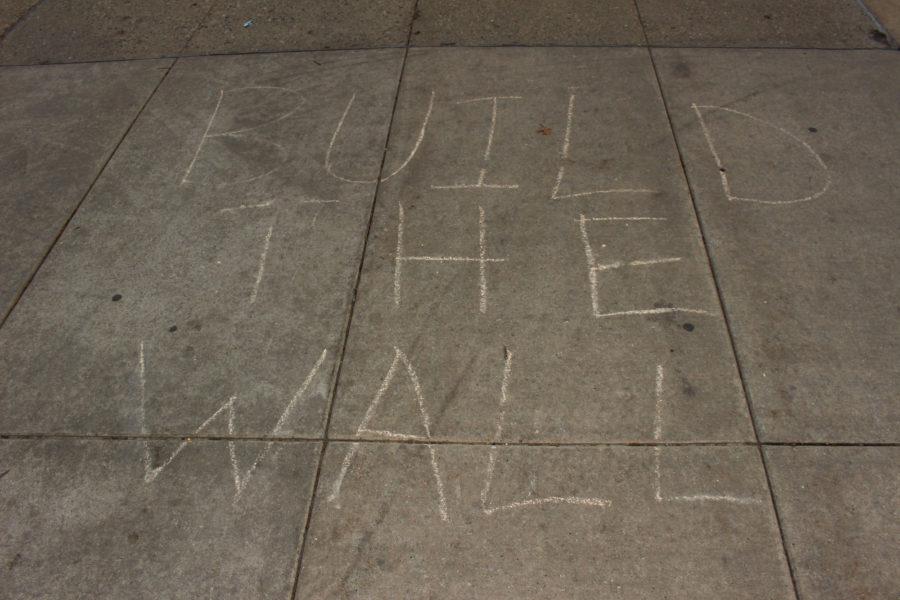 Trump slogan chalked on the quad on Tuesday

An anonymous person wrote “They have to go back #Trump” in green chalk in front of the Department of Latina/Latino Studies building Tuesday.

Shortly after, a second person crossed out the majority of the phrase, inserting a word before the hashtag, to reread “F*** Trump.”

To some, this specific message held potentially racist implications.

Gioconda Guerra Pérez, director of La Casa Cultural Latina, said that the center will provide support for any students who were hurt by what was written.

“I do have a message for my students,” Pérez said. “La Casa is here to support each one of you and we will continue providing a safe space and voicing your concerns.”

“Last semester, we saw incidents in social media. This week, it was chalking on the Quad,” Wilson said. “We don’t know what the next issue will be, but we know there will be one.”

Stressing that conflict is a by-product of intellectual discussion, Wilson encouraged the entire campus community to continue exercising their “right to free speech and expression.”

“These are often painful moments for our students, faculty and staff and we need to support one another as we strive to address divisive issues in society,” Wilson said.

The Illini Republicans released a statement on their Facebook page condemning the message.

“We as the Illini Republicans are not supportive of this chalking or of Mr. Trump’s policies,” the statement said. “We believe all students should feel comfortable on campus. We support all students’ first amendment right to freedom of speech, but do not agree with the phrasing or placement of this chalking.”

There have been multiple chalk messages written on college campuses across the nation endorsing Republican candidate Donald Trump over the past few weeks. This phenomenon has been labeled as #TheChalking.

The writings are not believed to be directly involved with Trump or his official presidential campaign.

At the University of Michigan last week, an unknown person wrote “Stop Islam,” “Trump 2016” and “Build The Wall” on campus. Some students subsequently called the university’s police.

The largest demonstration of these chalk messages came last week at Emory University. Roughly 100 pro-Trump messages were written on its campus, including “Build a Wall” and “Accept the Inevitable.” The chalking sparked student protests.

However, Emory University President James Wagner wrote his own message in chalk on campus in light of the protests, which read “Emory stands for free expression!”