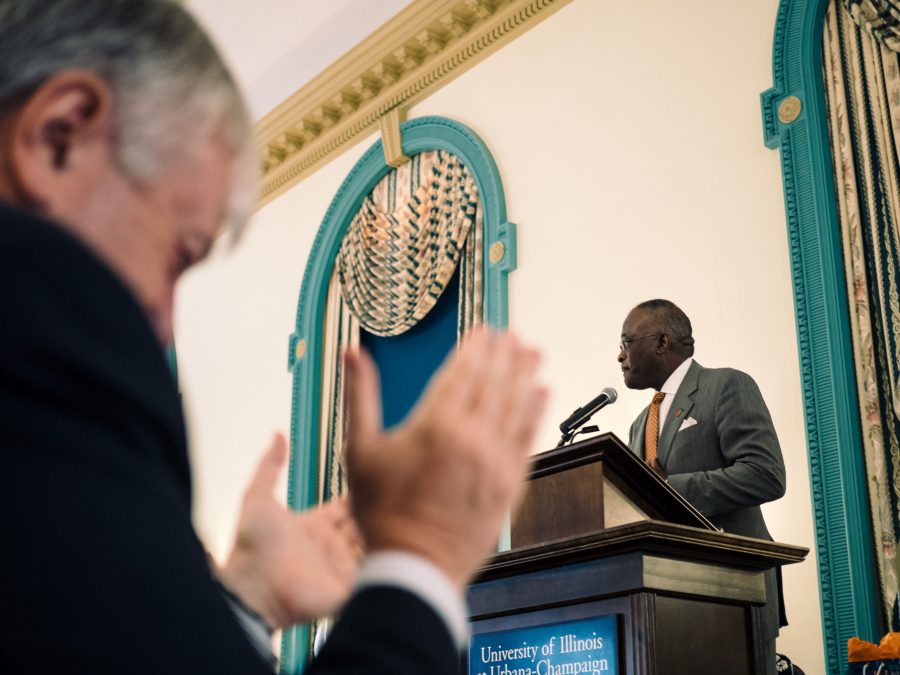 A member of the board of trustees applauses for the new chancellor Robert J. Jones.

As a nine-year-old boy growing up in a sharecropper’s shack in the cotton and peanut fields of Georgia, he looked at a piece of cotton and wondered how it grew. Or, as he called it,“the green plant with the white mass that had so much value to people.”

The experience “led me to a world I never even knew existed at the time,” he said in July at his welcome reception. What followed was a distinguished career as a crop scientist. Now, he will lead one of the top agricultural universities in the world.

“This job is a dream of a lifetime.”

Jones was approved as the next chancellor of the University and will start on campus Oct. 3. He has visited campus once since he was appointed and has had quite a few meetings with people who report directly to him, said University spokesperson Robin Kaler.

When he was announced to the campus in July, Jones said he will spend the first 100 days meeting with people on campus. He will embark on “a listening and learning tour, to approach the first 100 days here,” he said. “I can warn you that you can see a lot of me in the first 100 days, as we begin the process of (learning) what are the issues, and what we must do to move this University forward.”

He said he’s come a long way from the sharecropper’s shack to lead one of the greatest universities and be in a position to help shape the future of higher education.

“We are at a critical junction in higher education,” Jones said. “We need to find a way to make my story and other stories that are comparable accessible for everyone.”

He said he has a deep commitment to the land grant mission and he hopes to help reinvent and redefine what it means to be a public land grant university in the modern world.

“This is a place that really has quite a track record of shocking and upsetting the world through research and what is right and what we should be doing for one another,” Jones said.

“Game Changer of the Year”

Jones is the first African-American chancellor of the University. President Timothy Killeen called this appointment an “exciting and important moment in the history of the U of I.”

Killeen knew Jones personally at his previous job as vice chancellor for research and president of the Research Foundation of the State University of New York of the University at Albany, also known as SUNY. Their time overlapped at SUNY and in July at the welcome reception Killeen expressed his excitement “that we were able to recruit such a leader.”

Jones is currently the president of SUNY. He began in 2013 and his positions included CEO of Albany’s three campuses. His role there included broadening the interaction with the university and the community, creating more opportunities for students to complete hands on learning and faculty research. He created the largest expansion in 50 years at the university.

Among his many national awards, Jones was named the “Game Changer of the Year” by the Albany Business review in 2015.

Jones is a world-renowned researcher. He focused on research stabilizing corn grain yields and how they interacted with environmental stresses and global climate change. Jones is a fellow of the American Society of Agronomy and the Crop Science Society of America.

Jones said he hadn’t flown over the area in awhile and forgot how beautiful the landscape is because of the section lines of corn and soybeans.

“Since there is so much corn around,” Jones jokingly said, “I am pretty sure I will soon be outstanding in my field.”

“It takes a collective.”

Ron Lewis, student body president, said hearing Jones speak about his plan for the future of education at the University made him feel comfortable.

“It gave me a sense of confidence about where the University is going to be in the next couple of months and in the next year,” he said.

Lewis added that he’s heard many great things about the new chancellor and believes he will connect and care about the student body and its issues.

“Of course he has things to do on the administration level, but I’m pretty sure in the first 100 days he will be listening to students just as much as administration and faculty,” Lewis said. “I’m pretty excited to see what he does next.”

President Timothy Killeen said on the chancellor search committee website that the ideal candidate will be “A role model that will redefine higher education for the 21st century.”

But for now, Jones said, “Overtime, as chancellor, you will grow to tolerate me and even like me.”

“I think you all will grow to trust me.”