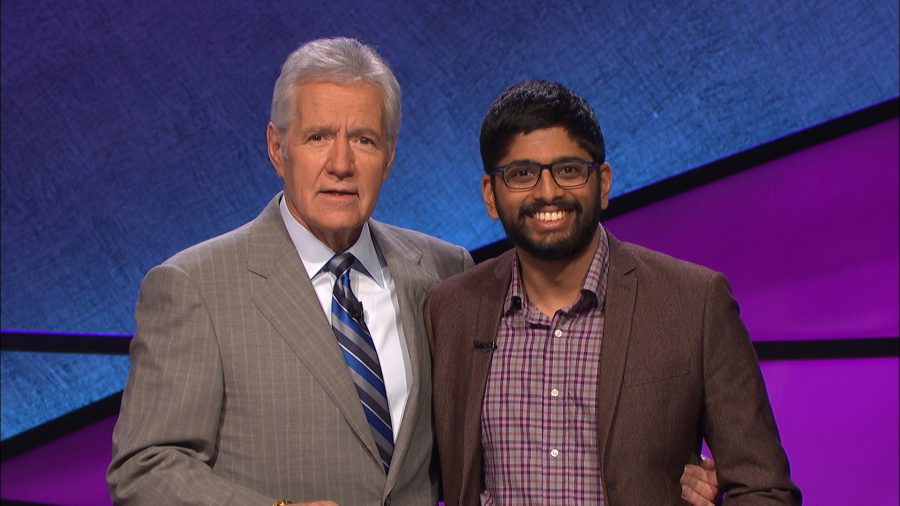 Pranjal Vachaspati appears with Alex Trebek in an episode that ran July 26, 2016.

Pranjal Vachaspati had trouble identifying midwestern states on a map as a new student at the University. He learned but for a unique reason.

He was going to appear on Jeopardy, but was “really terrible” at Midwestern geography, said Erin Rhode, Vachaspati’s friend from their time as undergraduate students at the Massachusetts Institute of Technology.

“He was test solving a puzzle and could not identify Iowa on a map, and then in a different puzzle he could not identify Wisconsin on a map,” she said.  “So, I am really proud of the fact that this guy, who does not know the difference between his “I” states, moved to Illinois and had to learn them and did actually really well on Jeopardy.”

Vachaspati, a graduate student in the College of Engineering, decided on a “whim” to compete on the show.

“I had a friend who was on the show, so I figured if she can do it, so can I,” Vachaspati said. “After I took the online test, there was like an audition and when I got back they called me and told me I would be on the show.”

He said he didn’t have anybody coaching him and that it took him about a month to prepare for the show.

“There’s this big online database of old Jeopardy questions, so I used this and I rented software to help quiz me and to identify my weak spots and practice with the buzzer timing,” he said. “I just referenced books and researched it online from people who had previously been on the shows.”

Vachaspati turned to Rhode for advice, because she had competed on the show in January 2015.

Rhode emphasized the importance of the buzzer, which she believes contributed to his success.

“Because once you get on the show, I mean, everybody knows the answers,” Rhode said. “The winner is always the one who can get the buzzer.”

Since Rhode had also been on the show, she said it was fun watching Vachaspati compete.

“I’m like 90 percent really happy for him, and 10 percent kind of jealous,” she said. “It was fun to watch him do really well, especially kind of knowing the show from behind the scenes, just kind of imagining him in that same scenario was really fun.”

Vachaspati said the morning of taping the show, all the contestants are taken to the studio together and that they film five shows back to back per day. He flew to California to audition for the show and for the tapings of each show, he said. Contestants have to pay for their own airfare and hotels.

Law professor Sean Anderson auditioned for Jeopardy four times between 1999 and 2015, where he won three times that October.

“I had actually tried a few other times to get on the show before it actually worked,” he said.

Anderson said he had researched past Jeopardy players’ experiences about what to expect, but he didn’t do much other preparation for the show.

“(Being on the show) was really strange, and sort of a combination of a lot of sitting around, waiting, and then really fast-paced stuff once episodes started being taped,” Anderson said.

Vachaspati said it felt crazy when he won, because he hadn’t expected to win.

“While I was there I was like, ‘Oh I’m gonna keep playing,’ and then it took a couple days for it to kind of sink in,” he said. “And then I couldn’t tell anyone for like three months and that was kind of difficult.”

Vachaspati won a total of $137,088 and said he will be returning to the show.

“There’s gonna be a tournament of champions,” he said. “I don’t know when it’s going to be because it hasn’t been scheduled yet, but I’ll be in that.”

A previous version of this article named Alec Trebek as the host of Jeopardy.