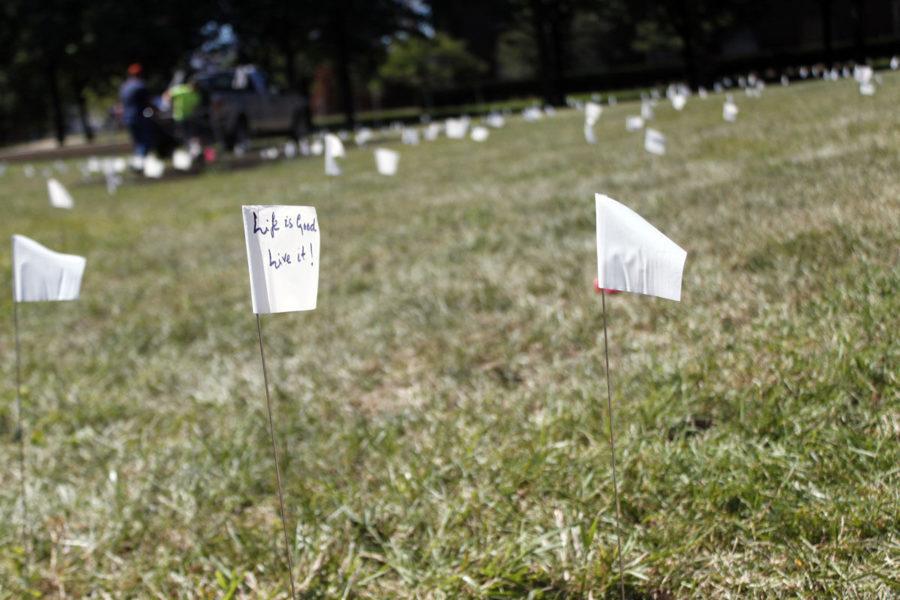 Flags flap in the wind on the Bardeen Quad during a 2014 event sponsored by the Counseling Center for National Suicide Prevention Week, which started Monday. Workers from the Counseling Center placed 1100 flags on the quad yesterday morning to represent the approximately 1100 college students who commit suicide each year. Passersby could then write encouraging messages to show their support.

As part of National Suicide Prevention Week, the University’s Counseling Center and University Housing were on the Bardeen Engineering Quad Tuesday from 10 a.m. to 3 p.m. to raise student awareness on suicide prevention programs on the campus.

Students and faculty at the Counseling Center, such as Graduate Assistant Dimitri Cacean, have gathered there in attempt to show students that they are not alone.

“A lot of our students, depending on where they are in the course of their lives, face suicide and suicide prevention at any time basically,” Cacean said.

Some possible signs of suicide include social isolation, slipping grades and other symptoms usually associated with depression. However, Counseling Center intern Anna Hoffman made it clear that while depression and suicide often have similar symptoms, they are not the same.

“It’s important to know that not everyone with depression is suicidal, but most people who are suicidal are depressed,” said Hoffman.

One way that students can educate themselves on suicide’s warning signs is through the Counseling Center’s online Kognito At-Risk Suicide Prevention Training. This virtual reality program is designed to teach students to see the tell-tale signs of suicide so they can stop it before it happens.

“We’re just trying to raise awareness that we are available, trying to give some information on training, such as KOGNITO, that we encourage all students to take so they can see signs and symptoms in their friends or even in themselves,” Hoffman said.

Emory University reports show that suicide can be a frequent occurrence on college campuses throughout the country. The reports show that there are more than 1,000 suicides on campuses each year, and the Suicide Prevention Resource Center has estimated that ten percent of college students have seriously developed a plan to commit suicide at some point.

Because of this, Cacean says the center ultimately wants to educate the student population on the issue.

“I believe our number one goal is to be as open to everyone and try to get as much information from students as we can,” he said.

It’s also not a problem confined solely to campus. The American Foundation for Suicide Prevention says that each year 42,773 Americans die by suicide, making it the tenth leading cause of death in the nation.

Still, young adults between the ages of 18 and 25 years are more at risk for suicide than adults over the age of 26. Because of this, college students are statistically more likely to have suicidal thoughts or have plans for suicide than older individuals, according to a report by Emory University.

One factor that makes suicide so dangerous on campuses is that not many students know how to approach it, according to Hoffman.