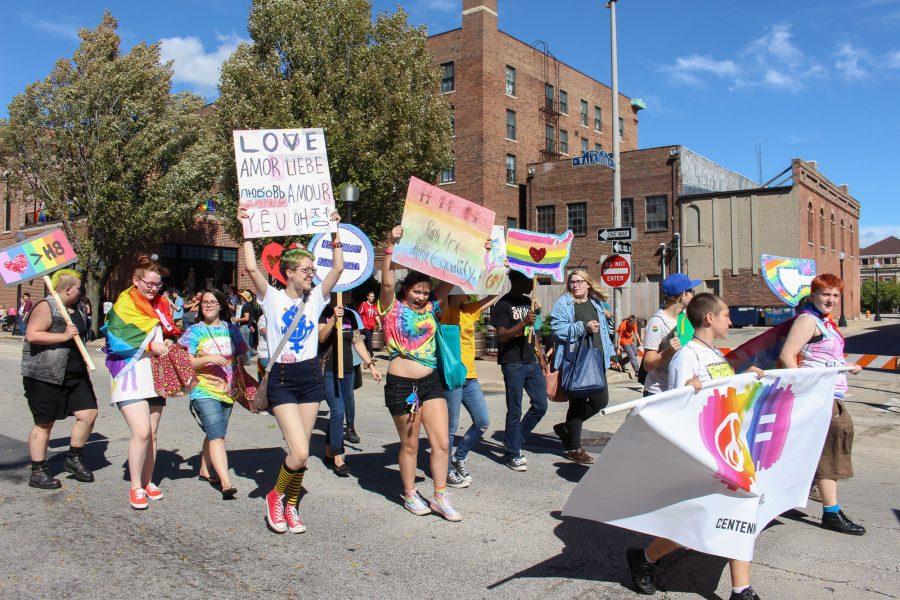 Veronica Bleaus sat on the back of a convertible clutching a microphone and talking to the crowd as she cruised through downtown Champaign.

But this wasn’t just any normal drive. Instead, Bleaus was partaking in the Seventh Annual Champaign-Urbana Pride Parade.

Under the stage name Veronica Bleaus, John Musser has been performing drag for 9 years. Self-characterized as “The Worst Drag Queen of the Midwest,” Bleaus knows she’s a stand out in the drag world. However, Saturday’s parade embraced her oddity.

“I’m admittedly a little bit of a strange queen, so it’s good to see different kinds of representations of drag performers and queer life,” Bleaus said. “That’s what this is all about.”

Bleau was among several drag queens to partake in the Champaign-Urbana Annual Pride Festival and Parade. Beginning just seven years ago, it holds the title as downstate Illinois’ only Pride Parade.

Pridefest originated as an indoor event in Urbana’s Lincoln Square Mall. However, three years ago, Josh Laskowski helped bring the festival to downtown Champaign. Laskowski works for festival organizer, the Uniting Pride Center, or UP Center.

Relocating the festival substantially increased both attendance and activities at the festival, Laskowski said.

“From a one day event to a weekend event,” he said. “The parade itself from three years ago has grown from 30 entries to almost 800 entries this year.”

Laskowski estimated a major increase in attendance relative to last year’s event. He said the festival attracted 7,000 people in 2015 and expected up to 12,000 this year. He attributed this huge growth to the increased marketing campaigns by the UP Center.

“We did a significant amount of advertising in outlying communities like Bloomington, Decatur, Springfield, Peoria,” he said. “And a big push in Chicagoland to get alumni to come back to their roots and really celebrate with us.”

When deciding the festival’s theme months ago, organizers considered several different ideas including a tribute to the victims of the Orlando Pulse Nightclub shooting. However, because it’s an election year, they went in a political direction, Lasowski said.

Both of Illinois’ senators, Mark Kirk and Dick Durbin, were scheduled to walk in Saturday’s parade. Senator Kirk cancelled due to a previous commitment.

“If we want to pass new laws, we need people that are going to vote for the things we want,” Laskowski said.

Senator Durbin even served as the festival’s Grand Marshall, an honor that Laskowski said was due to his pro-LGBT history.

“If you look at Senator Durbin’s voting record, I think it speaks for itself,” he said.

However, the memory of the Pulse Nightclub victims was not forgotten. Lasowski noted that following the shooting the UP Center immediately got involved.

“Obviously, we don’t want something like that to happen here or anywhere else,” he said. “But there comes a point where you can focus on it too much, and Pride’s mission can get lost.”

In addition to the parade, the weekend festival included a Drag Brunch at V Picasso and an LGBT wedding showcase at the Fluid Events Center.

“It’s a lot of fun and the party is great and the parade is great,” Lasowski said. “But there’s a lot of people that need questions answered to a lot of different topics.”

Sophomore Sarah Campbell was one of many University students to attend the parade and festival on Saturday. Campbell was impressed by the love on display and the community acceptance.

“It’s really important to bring the community together, to show there’s a lot of support outside of what you see in your own neighborhood,” she said. “If you see the entire community come together to celebrate something that’s really happy, it reminds you that things can be really good even when it gets bad.”

Lasowski acknowledged Champaign-Urbana could further help the LGBT community, namely in regards to transgender bathroom laws. However, he praised the lack of conflict regarding the pride events.

“We haven’t seen protests, like they do in larger cities, ever,” Lasowski said. “I think this community, due in part to the University, is very accepting of race, color, gender, everything.”

Correction: A previous edition of this article included Illinois Senator Mark Kirk as in attendance at the parade. Senator Kirk was scheduled to walk, but cancelled due to a previous commitment. The Daily Illini regrets the error.