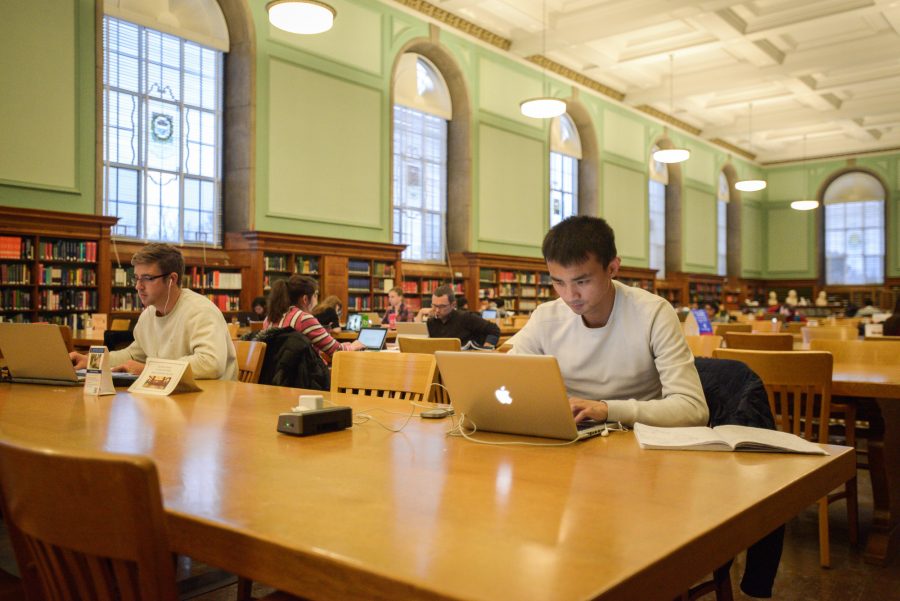 Huijing Cai, graduate in Business, studies in the Main Library on Sunday, February 15, 2015.

Students may have an easier time navigating the Main Library because two of its units were rearranged. The arts and humanities have taken center stage since the Literatures and Languages Library moved into the Reading Room.

JoAnn Jacoby, head of Reference, Research and Scholarly Services, said the reorganization of the library included moving the Literatures and Languages Library from a smaller room on the second floor into the Reading Room, which is the main room that students study in at the Main Library. The Classics Library Collection was moved into the old location of the Literatures Library.

“The expansion of the Literatures and Languages Library to include the classics collections, which were relocated from an out of the way corner of the fourth floor to a prime location on the second floor of the Main Library, establishes a humanities neighborhood near the entrance to the Main Stacks with its rich and extensive print collections and just down the hall from the History, Philosophy and Newspaper Library,” Jacoby said in an email.

Jacoby said the references materials that were previously located in the Reading Room were moved out and replaced by books from the Literatures and Languages Library.

“(The Reading Room) needed to be repurposed in terms of function,” said Paula Carns, head of the Literatures and Languages Library. “So, one of the best solutions was to think about maybe we could put literatures and languages with the classics collection.”

Carns said this past winter the Dean of Libraries decided now would be a good time to move the Classics Library into the Literatures and Languages Library.

The library is also able to have more staff, because all the smaller units have been combined into one larger unit. Before, there were only two people working in the Classics Library; now there can be many more. This also allows the libraries to be open for longer hours, Carns said, which also benefits students.

“More people together in like-minded units really does help,” she said. “It makes our working lives much better.”

With the new changes in the organization of the libraries came the addition of a Classics librarian, David Morris, who said a large part of his job involves collection development.

“So that means building the collection along the lines of what the faculty’s needs are, building on the preexisting strengths of the collection,” Morris said. “Much of that involves really forging a really close working relationship between our unit in the library and then the research and teaching faculty in the Department of Classics and then in related fields.”

He said part of the motivation behind moving the Classics Library was so that units that were related to each other could be in close proximity to one another, which in turn made them more accessible to students.

“It helps in terms of having … like-minded, or similar collections nearby,” he said. “It’s a nice synergy.”

Carns said when there were previous talks about moving the Classics Library, there had been an international outcry.

“Our Classics Library was one of three in the world that was an independent library with a really international profile,” she said. “So, it was really a big deal to say we were going to move that because it had historically been a real strength of our library.”

However, she said that people are happy now with the way the collection has been set up.

“I think sometimes this idea of closing a library — there are negative connotations  — but the classicists seem very happy,” Carns said. “They are very happy that the collection wasn’t reduced.”

The Main Library is also currently undergoing renovations to install doors that will require people to swipe their i-Cards in order to gain entrance. Carns said this project is not a part of the Literatures and Languages Library expansion, but that it is being done for safety precautions.

“That project and the (Literatures and Languages) project really show how the library very actively tries to figure out what patrons need … how can we meet their needs,” she said.