UPDATE: Police continue to search for shooter, no confirmation on two shootings being related 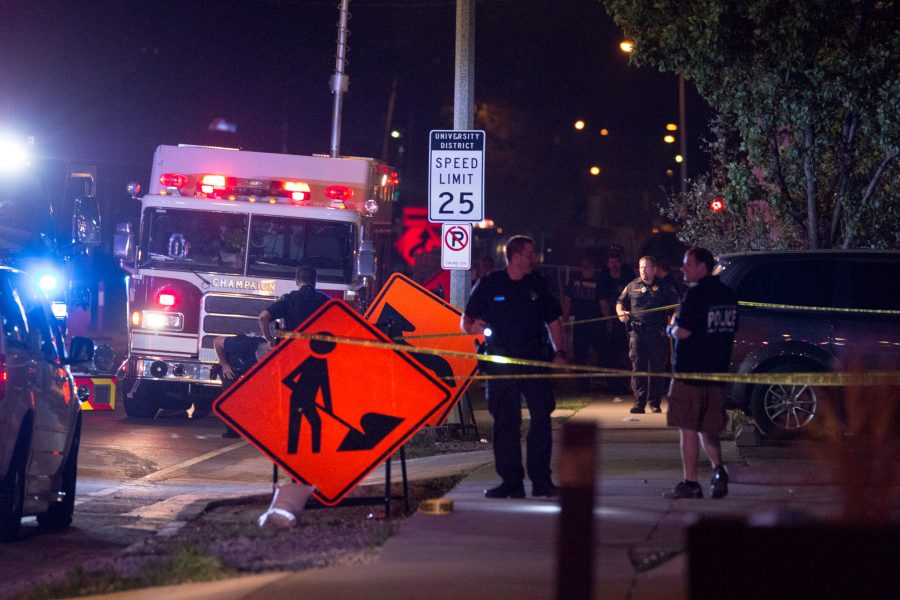 Police officers investigate a shooting that took place early Sunday morning. A Mundelein man was shot and killed by a gunfight unrelated to him.

UPDATE (9/27 4:48 p.m.):
Champaign police spokeswoman LaEisha Meaderds said at this time in the investigation, no evidence points to the two shootings on Sunday morning being related.

“Initially, due to the proximity and timing of the State St. shooting, we could not rule out the possibility that the two shootings may be related,” Meaderds said. “However, as the Green St. investigation progressed, we have found no credible information at this time to confirm the incidents are related.”

One man was killed and five others were injured overnight when shots were fired on Green Street and State Street early Sunday morning.

George Korchev, who was visiting from Mundelein, was pronounced dead at 1:02 a.m. at Carle Foundation Hospital. He was identified by Champaign County Coroner Duane Northrup. He was 22 years old and did not attend the University.

Korchev was not involved in the fight that resulted in the gunfire. The Champaign Police Department believes an argument occurred at an apartment party on the 300 block of E. Green Street in Champaign. The argument moved outside, leading to a fight and shots fired. The gunfire struck Korchev and three others who were walking by.

A fifth person was struck by a car while fleeing the gunfire.

The victims were taken to hospitals nearby and sustained minor and non-critical injuries.
At 1:08 a.m., police received reports of additional gunfire in the 700 block of S. State Street in Champaign. One victim was then taken to the hospital for non-critical injuries. Investigators believe the two incidents are related.

The police are still seeking the suspects involved in the shootings.

As for the pedestrian who was struck by a vehicle, the driver of that vehicle, who was also fleeing from gunfire, has come forward, according to the press release.

The police are asking that anyone at the party or witnesses to the events please contact the Champaign Police Investigations Division at [email protected] or phone 217-351-4545. Anonymous tips can be left at 217-373-8477, online at www.373tips.com or by texting “CCTIP” plus the crime information to 274637 (CRIMES).

Crime Stoppers is offering a reward of up to $1,000 for information leading to the arrest of those person(s) responsible for these crimes.

The area from Healey to Green streets and from Second to Fourth streets was blocked off after the shootings as the Champaign Police Department investigated.

“Our thoughts and prayers are with all of the victims and our Champaign-Urbana community at-large. These senseless acts of violence cannot be tolerated,” said Champaign Police Chief Anthony Cobb. “We are actively pursuing all leads and will continue to work with area law enforcement agencies to hold these individuals accountable for their criminal acts of violence.”

Stay with The Daily Illini as this story develops.