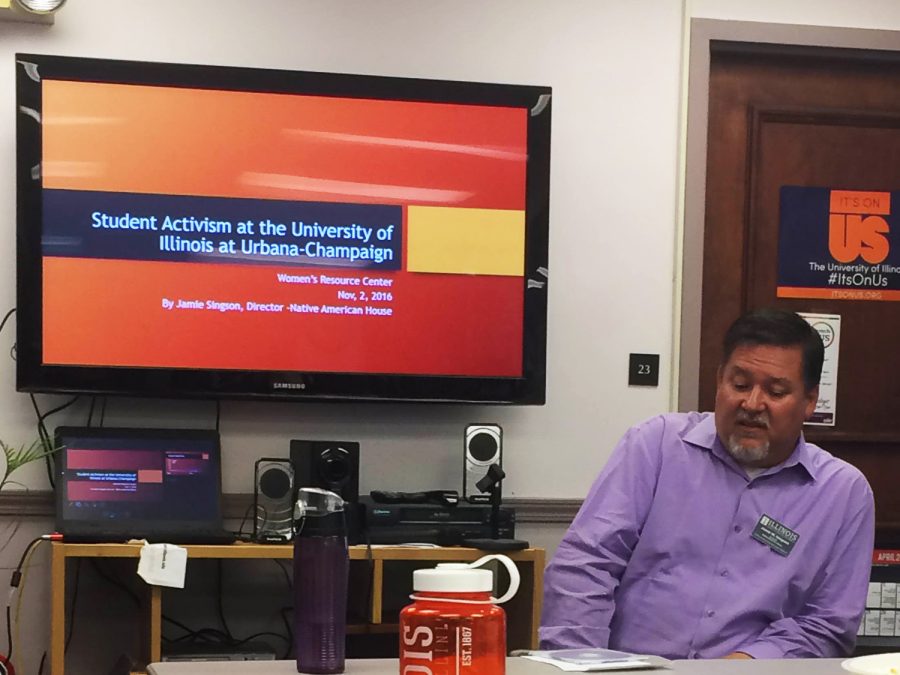 Less than one percent of University students self-reported themselves as Native American/Alaskan Native, according to the Fall 2016 Statistical Abstract of Ten-Day Enrollment by the Division of Management Information. And to celebrate these students the month includes lectures, dinners, workshops, performances, dialogues and a film series.

Bisola Osundairo, junior in Applied Health Science and student staff member at the Native American House, said in an email that Native American Heritage Month is a time to “recognize, acknowledge and celebrate a group of people that are usually not recognized at all.”

In a lecture, “Indigenous Students on Campus: Historical Legacies and Current Issues,” by Singson on Nov. 2 at the Women’s Resource Center, some of the largest issues Native American students face were addressed.

At the Women’s Resource Center, Assistant Director Rachel Storm, said the idea of understanding that people can fall into many social categories is important to remember when thinking about heritage.

Storm said that the student cultural centers on campus are a result of student activism and are a big help to minority students. But still, without proper resources, minority students are more likely to drop out of college, Singson said.

Singson focused on the history of minority students at the University during a lecture. He noted that some minority students struggle more on a college campus because of a lack of resources specifically tailored to their needs. To increase retention, Singson believes that is important that students see a reflection of themselves, something that is hard to come by for Native American students.

“Academically, helping (Native American students) be competitive is important,” Singson said. “Of the 567 tribal nations in the country, zero are in Illinois, so it is easy for them to get lonely.”

Singson believes that one of the reasons that there is low Native American student enrollment is due to the University’s lack of competitiveness to keep these students from enrolling elsewhere, where they may receive additional financial aid. Many prospective Native American student’s are deterred by the cultural relevance and nostalgia for former Illini Chief mascot.

“The hard part is that many just want to be students,” Singson said about the chief. “Being asked to represent a large group of people can be problematic and overwhelming to these students.”

Both Singson and Osundairo see positivity in acknowledging a National Indigenous Day.

“It makes more sense first of all to recognize a group of people that are actually native to the land we are leave and thrive on,” Osundairo said.

Some universities, like Northwestern University, acknowledge National Indigenous Day over Columbus Day to promote healing for the Native American community who has suffered tragedy at the hands of colonialism.

“The value of that happening is the ability of other narratives to be heard, so that the Columbus narrative doesn’t become dominant,” Singson said.

For a full list of the events, visit the Native American House’s page on the Office of Inclusion and Intercultural relations website.