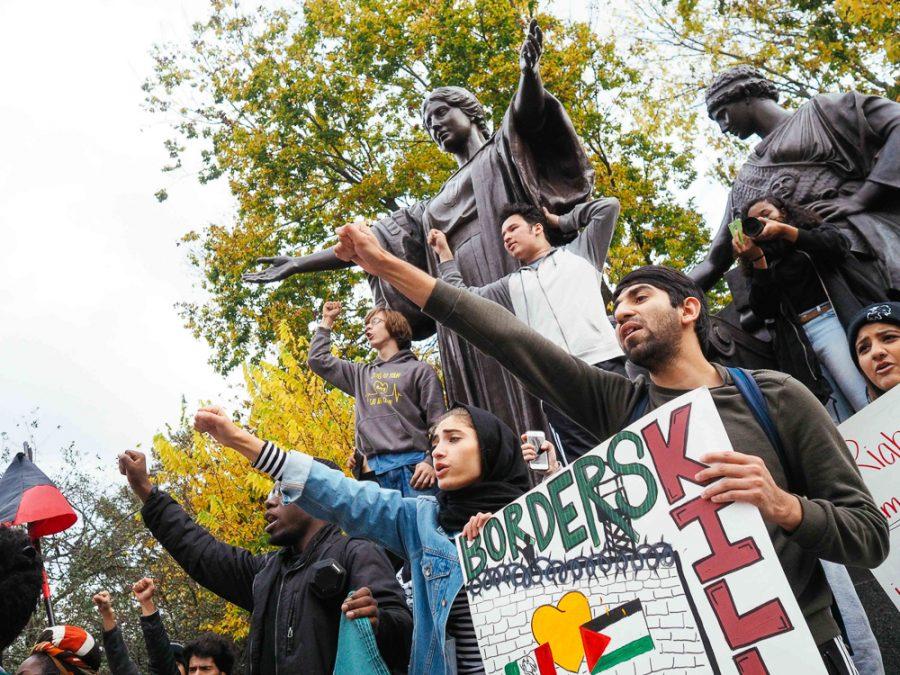 Students gather at Alma Mater to march through the Quad and down Green Street in order to protest President Elect Donald Trump on Friday.

In response to a petition on campus requesting that the University become a sanctuary for undocumented students, Chancellor Robert Jones created a working group to review University policy for these students.

Cities across the country have reaffirmed their stances as sanctuary cities after the election of President-elect Donald Trump, who has vowed to deport millions of undocumented immigrants.  They are essentially committing to not actively deport undocumented residents.

Champaign County is a sanctuary county, but a petition from a group of professors from various liberal arts departments urges the University to extend the policy to its campus. It has 2,120 signatures thus far.

Interim Provost Ed Feser said the group will not be making a recommendation, but instead is compiling information on the University’s current policies and practices. Jones echoed Feser’s sentiments.

“We need that critical information before we could even take a position on how to respond,” Jones said at Monday’s Senate Executive Committee meeting.

Members of the working group include members of administration across campus, such as Enrollment Management, the Office of Student Affairs, the Provost’s Office, La Casa Cultural Center, the Graduate College and the University of Illinois Police Department.

A sanctuary area has policies of not cooperating with federal immigrations authorities, providing public protection and safety for undocumented students. For example, the University of Illinois Police Department would not execute deportation orders and the administration would not share private student information about where they live.

Illegal immigration has become a signature political issue for President-elect Trump, who has pledged to suspend federal aid to sanctuary cities. Jones said becoming a sanctuary is a complex issue and the University needs to complete an analysis before understanding the situation.

Despite Jones’ caution with signing the campus petition, he signed a statement in support of the Deferred Action for Childhood Arrivals, DACA, program, which protects undocumented immigrants who arrived in the country as children.

It is in support for their ability to be able to access higher education, access in-state tuition and other benefits, Jones said. All three chancellors from the University system along with 300 other presidents nationwide have signed the letter.

Professor Mark Steinberg, chair of the academic freedom and tenure committee, initiated a discussion about a sanctuary during Thanksgiving break with members of the committee. He told the SEC there is a sense of urgency connected to the working group’s efforts in wake of Trump winning the presidential election, and it is important to know where the University stands legally and what it is allowed to do.

“This is clearly a policy question and campuses across the country are discussing this,” Steinberg said. “We don’t want to be behind in what is becoming an important national discussion.”

He also said this is an academic freedom issue as well because it involves students whose academic freedom needs protection. While the working group compiles information, Steinberg recommended Jones to start thinking of what political and philosophical stances the University will take.

“This really isn’t limited to undocumented students only, not to minimize their importance, but there is also an issue of Muslim students, Muslim faculty and a very large number of immigrants here on temporary visas,” Steinberg said. “Having a set of policies in place not just for academic freedom and tenure, but also for safety issues, is very important to our committee.”