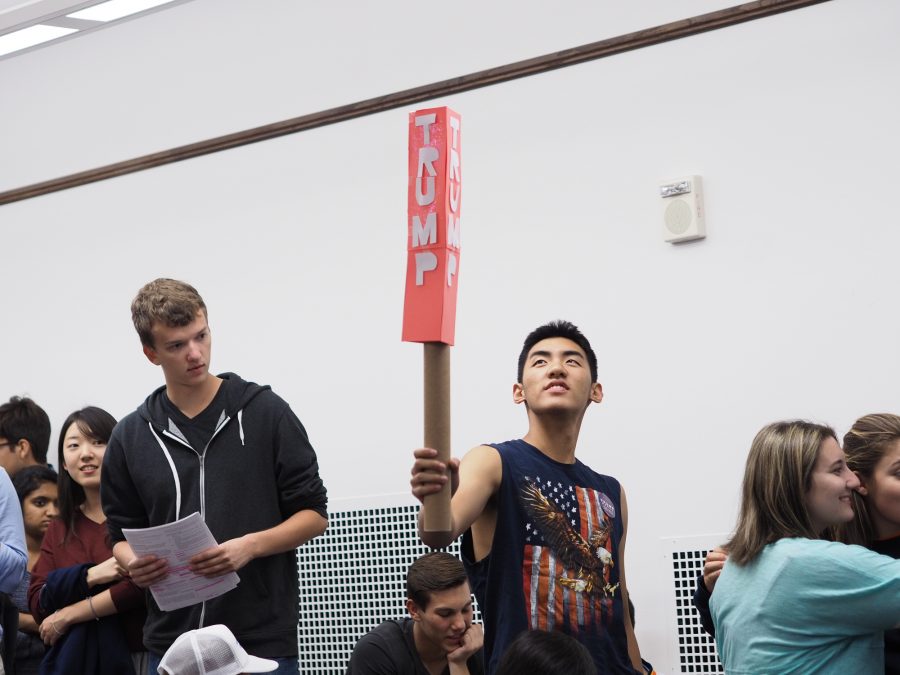 A student, part of the Illini Republicans Club, holds up a handmade sign supporting Trump at a debate watch party.

Former president of the Illini Republicans, Chris Piper, had a controversial semester. While in Marion, Illinois, working for a political campaign, members of his club doubted his leadership and asked for the resignation of himself and the current president and junior in LAS Stephanie Menezes.

Menezes was supposed to hold the position for Piper while he worked in Marion.

Last October, Piper and Menezes were given a petition from the executive board of the club requesting they step down.

Piper created an email chain in which he asked all of the Illini Republicans to give their opinions on the petition. Some of them noted Piper should step down because of an anti-Trump post he put on the organization’s Facebook page.

“The fact that a self-proclaimed Republican would say anything negative about the Republican nomination in an election as critical as this one is mind boggling,” wrote student Charles Dochoff. “Do you even perceive the consequences if Hillary appoints the next Supreme Court judge?”

Piper was told by the campus police that members of the executive board accused him of wrongfully holding club funds in a private bank account.

Piper was told by University police officer A.J. Martin in an email that the practice is fairly common and not illegal. Still, Piper sent the funds to the club’s treasurer.

However, some members of Illini Republicans believe legal actions against Piper are justified. Some members, like sophomore in Engineering and LAS Benjamin Correll, thought the illegality couldn’t be ignored.

The initial problem was that they didn’t want to involve the police.

“We all respected Chris and didn’t want to get him kicked out of the University, but decided it was the proper action to take,” he said.

In addition to the private bank account issue, Correll said Piper held too much power in the club despite not being a student this semester.

“We had numerous problems with this arrangement,” Correll said. “When he actually went away, he tried to control how the RSO acted and how the RSO proceeded, basically (controlling) on-campus matters without actually being a student.”

Now that Piper prepares to come back for the spring semester, he still feels wronged.

“I don’t want to interact with any of those involved, trying to slander me, discredit me, harass me,” Piper said. “It’s really not worth that sort of interaction. I do care about the club, obviously. I put countless hours into it; I built it up from almost nothing.”

Piper said he’s begun developing a new conservative club. It’s still in the early stages, but he sees it as “counter-conservative Republican club.”

He hasn’t been to any meetings and hasn’t talked to any of the executive board members.

To Piper, the club will be a place where Republicans on campus can have civil discourse. He wants a place for conservatives to agree to disagree without being threatened by a club’s executive board.

“Honestly, who would want to be in a club or organization where members are throwing around accusations like that, filing police reports and staging coups,” Piper said. “It’s still an RSO; it’s not some government we have to take so seriously.”